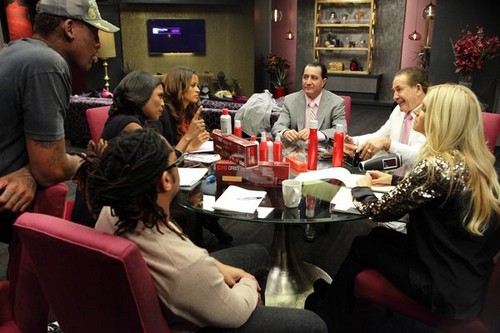 Tonight my favorite show THE CELEBRITY APPRENTICE returns with a whole new episode called, “Men In Black are gonna Come Get Him.”  On this week’s show the All-Stars must use a glass truck to create a marketing campaign for Farouk System Products.  Did you watch last week’s episode?  We did and we recapped it here for you.

On last week’s show Mr. Trump tasked the All-Stars with performing a Soap Opera scene for Crystal Light. In one of the season’s most dramatic outbursts, a Project Manager went head-to-head with an insubordinate team member. Meanwhile, the other team threatened to mutiny when their Project Manager’s dictator-like style rubbed them the wrong way.  At the end of the show LaToya Jackson did not bring Omarosa into the boardroom and it ended up getting LaToya fired.

On tonight’s show The contestants’ marketing skills are tested when tasked to promote Farouk Systems products using a glass truck. Coming off the heels of a surprise pick in the Boardroom, one team struggles to find harmony with a troublemaker on their team.

On the other side, one team member is constantly labeled a “weak player” and has to prove to their team they are worthy of being an All-Star. In the end, one team hits the mark and the other is left to fight it out in the boardroom, where another celebrity is sent packing. Boardroom advisors: Arsenio Hall and Donald Trump, Jr.