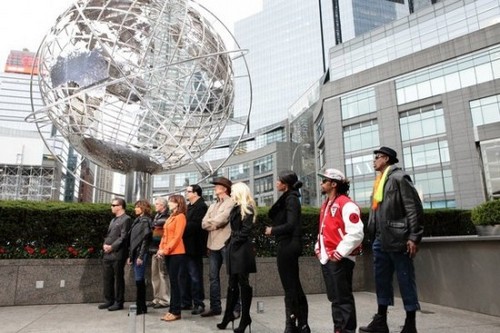 Tonight my favorite show THE CELEBRITY APPRENTICE returns with a whole new episode called, “Lightning Strikes Mr. Hang Brain.”  On this week’s show the All-Stars show their artistic side to create and sell original artwork.  Did you watch last week’s episode?  We did and we recapped it here for you.

On last week’s show the contestants’ marketing skills were tested when tasked to promote Farouk Systems products using a glass truck. Coming off the heels of a surprise pick in the Boardroom, one team struggled to find harmony with a troublemaker on their team.  On the other side, one team member was constantly labeled a “weak player” and had to prove to their team they were worthy of being an All-Star. In the end, one team hits the mark and the other was left to fight it out in the boardroom.

On tonight’s show the celebrities are tasked with creating original, three-dimensional artwork. But winning the task comes down to fundraising, and one contestant struggles with bringing in enough money to keep the team safe in the Boardroom. Meanwhile, the other team’s Project Manager has to deal with a teammate who over-promises and under-delivers. Special guests include Chaz Dean and The Blue Man Group. Boardroom Advisors: Piers Morgan and Eric Trump.

The teams wait to find out who was eliminated.

Omarosa says she has survived more attempts to get rid of her than anyone else did.  Dennis comments that Claudia would have survived if she had brought Omarosa back.

Omaros tells everyone people are not scared of her she is just smart.

A new day the teams meet with Trump and Piers.  Piers comments to Omarosa, “Still here?”  Trump tells the contestants that this week each team are going to have to sell and market art.  To equal out the teams Donald moves Trace over to team Power.  Little Jon decides he wants to be the project manager for Team Power and Lisa is the project Manager for Plan B

Lil Jon takes his contestants to the art store.  Trace is not pleased he has been sent over to Team power.

On Team B Penn tells the team that they have 15 items and they have to make them sell for as much as possible.  Steven asks Penn to clarify that, specific to Penn the art does not matter.  Penn says he does not feel anyone is talented enough to make good art.  Steven tells Penn specific to him, the art does matter.  Stephen wants to contact an art dealer to sell their art.  He feels that an art dealer could sell their one of a kind celebrity art for $20,000.  Steven gets on the phone and he seems to be talking to a Prince.  However, the members of the team do not believe it, they think he is faking.

Lisa Rinna, who is the project manager is feeling a lot of pressure – she feels the other team has all the team members who can get money.  She is not happy Donald moved Trace over to the other team.

Lil Jon says he has one donor ready to being in $65,000, Omarosa says she can bring in $10,000.  Omarosa says they cannot lose with Trace.  Dennis says he has no friends with money but he does have a Dennis Jeter bat.  They team finds out that Dennis is a great artist.

Piers Morgan comes to visit team Power and asks what their strategy.  Lil Jon says the person who brings the least money in.  Piers warns him not to let Omarosa keep tracking the money.  Lil Jon tells him he has taken care of that.  Piers warns the team to watch Omarosa because she is slippery.

Trace is getting people to come in and buy his artwork.  Lil Jon is calling in his big guns in and is hoping they can come in for him in a big way.  he needs a win.

Lisa Rinna wants to raise as much money as she can for St. Judes, but she is worried.  Gary Busey’s Mr. Hang Brain sold for $25,000 and he is thrilled.  All of a sudden the Blue Man Group walks in and they put $15,000 in jelly for them.  Teller buys Penn’s piece for $50,000.  So far none of Steven’s people or his art dealer have shown up.

Over at Power Team Lil Jon sells his piece for $55,000.  Omarosa is worried because Lil Jon has said he will bring the two people who bring in the least in the board room.

Over at Plan B Stephen is showing is art and bragging that his art is the best.  Stephen them walks around and says he is an artist.

Lisa’s dear friend Chad Dean comes in and she is excited.  He ended up buying 3 art works for a total of $80,000.  Stephen is upset because Lisa sold his best piece.

Lisa tells Donald she liked her team and says her star was Penn because he brought in a lot of money, $85,000.  Donald asks Lisa how much Stephen brought in and Lisa says $5,000.  Stephen claims that the people who came in to buy his pieces could not buy because his pieces were bought buy other people.

Trace says it is different being on Power but he likes being on the other team.

Omarosa says that her team was great and she loved having Trace on her team.  Lil Jon says Dennis was the best artist.  She says she would bring Dennis and Omarosa back in the boardroom because they made the least amount of money.

Donald tells Lil Jon to keep his team there someone is going to be fired.

Lil Jon tells Donald he thinks they did excellent, he was proud of what they raised.  Omarosa tells Donald that Lil Jon was totally laid back and he should be fired.

Lil Jon brings Omarosa and Dennis back to the boardroom.

Lil Jon, Omarosa and Dennis come back into the Boardroom.  Lil Jon says he would rather go forward with Donald because he came to work.  Dennis would like to forward with Lil Jon.

Lil Jon tells Donald Dennis works harder.  Piers and Omarosa bicker back and forth.  Dennis points out to Donald that Omarosa should have gone home the past 2 weeks.  Dennis accuses Omarosa of faking when she was crying the past week.

Donald thinks Dennis’ story is a great story of redemption.  He tells Omarosa that it is hard to fire Dennis because Dennis did not back down when he was fighting with Omarosa.  Donald tells Omarosa he adores her but he fires her!  YAY!