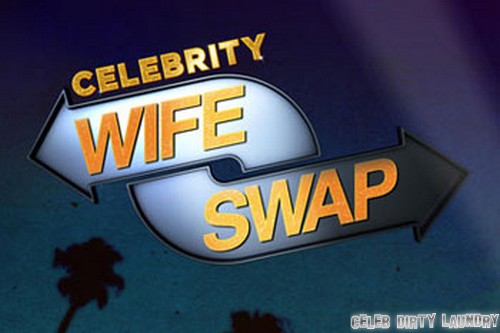 Tonight on ABC Celebrity Wife Swap returns again for a whole new episode.  On tonight’s show Actor Gina Loudon and Angela Envy swap lives.  Did you watch last week’s episode when Alan Thicke and Comedian Gilbert Gottfried  swapped lives?  We did and we recapped it here for you.

The families that swap lives this week are:  A Tea Party Activist – Gina Loudon is a staunch Tea Party activist and conservative political pundit who lives in San Diego, California with her husband, former Missouri State Senator John Loudon, and their five children — Lyda (17), Lilly (13), Jack (10), Beau (6) and their adopted son Samuel (6), who has Down syndrome. Religion and politics are topics of constant discussion in the Loudon home, with John leading daily Bible study for his wife and children.

In Charleston, New York, Angela Envy a mom in a polyamorous relationship lives with her husband of eight years, Chris, along with Angela’s daughter Brooklyn (12) and their three children — Maverick (7), Lyric (5) and Kingston (1-1/2 ). Angela and Chris also share a live-in girlfriend, Ashley, who has become part of the family. Chris is a semi-professional wrestler in his spare time and works at a local warehouse to support his family.

We will be covering tonight’s Celebrity Wife Swap, Gina Loudon and Angela Envy episode with all the details.    For the first time in the show’s history, a family breaks the rules of the swap and refuses to reunite for the roundtable discussion.  You don’t want to miss it!  Don’t forget to come back to this spot at 8PM for our coverage of the episode.

Tonight on Celebrity Wife Swap, Gina Loudon initially shocked the audience with the statement she “always wanted a child with Down Syndrome” while her counterpart Angela Envy had her own moment of shock value when she gleefully announced her poly-amorous relationship with her husband, Chris, and a young 23 yr. old woman named Ashley.

Each woman enters the other’s home and tries to get the lay of the land. Much to their surprise when they read a little bio about the households they entered, you see the apprehension already in the air.

Angela, upon meeting the Loudon family, tried in vain to gently explain her unique marriage and was asked if she was Muslim by Angela’s husband John. While in Albany, Angela explains her political career, something Angela’s husband appeared to have some misgivings about.

Later when Chris demands his dinner not politely nor gently rubs Gina the wrong way. Her night continues into a downward spiral when trying to cook the unhealthier choices than she is use to. However her saving grace is Ashley who helps her out with their daily chores. Despite what she many initially thought, Gina displayed more sympathy than judgment for Ashley whom Gina feels is being used. When the new threesome go out for some quality time, everything appears fine on the surface only for Chris to question the night’s undertone when he does some research into Gina’s life.

Back at the Loudon house, Angela is admittedly uncomfortable by the line of questioning directed at her relationship. Her relationship with Gina’s husband deteriorates when daily bible study focuses on perversions, something Angela feels was directed at her.  One of the lighter moments was when Angela got the eldest daughter to talk about more than politics and open up about make-up.

Nevertheless it isn’t until the wives are allowed to switch the rules for a day does tension build to a breaking point. At first it starts pretty harmless. Angela has asked for no religion or politics. She wants the kids to have a little more fun. If these rules are broken then a dollar must be put in a jar for donation to a gays and lesbians youth center.

Gina, on the other hand, has a tougher time when she’s allowed to change the rules. She asks Chris to cook and clean. Well he does come off as chauvinistic and occasionally rude. Also there should be no television or junk food. Except for the odd groan from the kids, it was so far so good. Until Gina tells the family she’s bringing in daily bible study and that Ashley should dump Chris and get a life of her own. Ashley refuses to leave but otherwise the family follows Gina’s rules to the letter.

Meanwhile Angela is enjoying her new rules with the family when John, who up to that point has made off the cuff remarks about sexuality, puts a check for $250 into the jar for donation. Not to be altruistic but instead to read biblical passages to Angela about the punishments to homosexuals when they continue to live a life “immorality”.  She immediately storms out, John follows her so that he can continue to preach to her. Even with Angela in tears, he still speaks about how he hopes she finds a way back to her religion.

Gina also has a tough time when she brings in religion only to have Angela’s daughter storm off. Her stay follows closely to that of Angela when she butt heads with Chris. It all started when as part of her rules Gina tries to explain the constitution to Chris only for him to react badly when he questions the rights of the LGBT community. He feels she’s been glossing over denying rights to his wife’s community while she maintains her ground that he needs be the moral fiber and leader of his family.  At one point he go as far as to call her evil… to her face.

Chris ends the discussion with telling Gina she could leave which she does. She calls John and tells him that she’s done with this and coming home. That’s the last that was heard from her family as they refused to do anymore appearance or statements.

Angela is reunited with her family and speaks about her discomfort and disappointment that the swap wasn’t more successful. Despite the bad feelings on both sides, the Envy’s do admit that they kept some of Gina’s suggestions.

Tonight’ show was more dramatic than usual with both families doing some undermining. But hey when have any of the wife’s swaps been drama free. Next week the TV show follows the swap between a red neck and a beauty queen. I doubt it’ll be as controversial but it’ll still be entertaining.