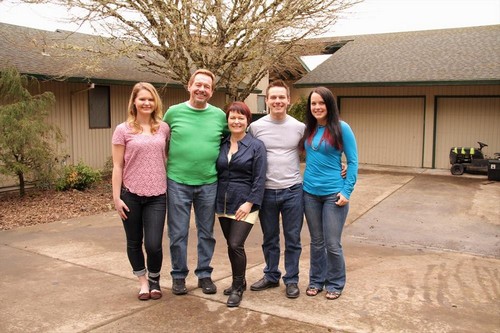 Tonight on ABC Celebrity Wife Swap returns again for a whole new episode.  On tonight’s show two former WWE stars will swap lives.  “Nature Boy” Ric Flair trades lives with former WWE rival “Rowdy” Roddy Piper.  Did you watch the last drama filled episode when Joan and Melissa Rivers swapped lives with Bristol and Willow Palin?  We did and we recapped it here for you.

Ric Flair, better known to wrestling fans around the world as “The Nature Boy,” lives in Charlotte, North Carolina with his girlfriend, Wendy, and her four children, Sophia (14), Sebastian (12), Paris (10) and Summer (9). Ric and Wendy live a very lavish and fast-paced lifestyle and enjoy the finer things in life, spending most evenings out on the town where Ric revels in his celebrity and the attention of fans.

“Rowdy” Roddy Piper is one of the WWE’s most notorious villains and one of “The Nature Boy’s” fiercest competitors. Retired from the ring, Roddy lives with his wife of 30 years, Kitty, daughter Fallon, son Colt and his fiancée, Sarah, on a large piece of land on a mountain in Portland, Oregon. While retired from the business, Roddy’s never too far from the sport, spending his days training Colt, who is following in his father’s footsteps as a professional wrestler. The Pipers are a close-knit family who enjoy spending time at home together. Kitty is solely responsible for the running of the home, including cooking, cleaning and caring for the family’s animals.

We will be covering tonight’s Celebrity Wife Swap,   “Nature Boy” Rick Flair and“Rowdy” Roddy Piper episode with all the details.  You don’t want to miss this episode, you never know what craziness is going to break out between two WWE rivals!  Don’t forget to come back to this spot at 8PM for our coverage of the episode.

Former opponents Ric Flair and Roddy Piper are set to switch families tonight on Wife Swap. Ric lives with girlfriend Wendy and her four children. He has children of his own but isn’t close with or his four ex-wives. Despite past financial problems, Ric and Wendy like to live the lavish lifestyle.

Roddy on the other hand lives on a mountain with his wife Kitty, family, and several animals. They live with two of their children and they also live with their son’s fiancée. They are very frugal. Unlike Ric, they do not have any sort of staff. But what is probably the biggest shock is that the wives don’t know who their swapping with so they have no idea that they’re swapping with their respective man’s rival.

Roddy’s wife is surprised to be in Ric’s house. Her husband apparently served as a best man to Ric’s first marriage. They read their rule guides and uh oh. They don’t know had to adjust. Wendy is upfront once she meets Kitty’s family. She tells them she’s Ric’s girlfriend and that she doesn’t clean. Over at Ric’s house, Ric immediately recognizes Kitty. He decides to take her jewelry shopping. Kitty is hesitant but agrees to a necklace.

Wendy was asked to cook the family a meal of meatloaf, mashed potatoes, and green beans. Everyone agreed the green beans were good. Roddy’s son Colin gave his food to the dog. Wendy also has to do the laundry. Meanwhile Kitty can’t take Ric’s nightlife. She’s tired out and he’s still going.

The next day Wendy has to help with animals. It’s too much for her and she already believes Kitty to be a wonder woman. What is wonder woman doing? Kitty was given money for a spa day so she took it and enjoyed herself. Although she did wish she had more time with Wendy’s children. Wendy sees the family during Colin’s practice. Witnessing how close they all are, she wishes she and Ric could spend more time with her kids.

Kitty is back at the house when Ric’s ex and her very good friend comes by. Both women are concerned that Ric hasn’t slowed down partying and is spending money without even thinking about tomorrow. Ric was a family guy but know he’s just trying to remain top dog.

It’s time for rule change. Wendy wants to instill a date night and also housekeepers. She doesn’t leave out the rest of the family though; the family is given one day to be pampered. Kitty asks Ric to stay home a full day. She also wants him to begin saving money and going out incognito so that he won’t be stopped by fans. The husbands aren’t taking rule change so well but they follow it.

The first day of shopping costs Roddy nearly 9 grand. But he sees his family having fun so he goes with it. Kitty sees Ric struggling with budget cuts so she takes time to talk to him alone. They get to the bottom of why he’s constantly on show. Ric had struggled with retirement and that’s why his personality changed so much.

Ric actually enjoys hanging out with Wendy’s kids. He even liked cooking with them knowing it was one of the budget cuts. On Wendy’s last day, she shows Roddy the importance of date night.

The women say an emotional goodbye to their surrogate families before the two couples meet up for a talk at the round table. At the table everyone greets each other warmly and then the drama starts. Kitty is the one to bring up how Ric needs to stop treating his “friends” to drink every time he goes out. Wendy also states how she doesn’t like it when she’s left all alone while Ric goes to mingle with his fans. After hearing both women, Roddy is now concerned. He tells Ric that he has to be careful with people using him. Ric doesn’t want to hear it but Roddy makes sure his old friend knows he’s there for him.

Kitty switches the subject to safer ground asking about rule change. Kitty learned to come out from her safety zone. Wendy learned to spend more quality time with her family. Ric does end up spending more time with Wendy and their family and Roddy is thinking about moving off their secluded mountain.