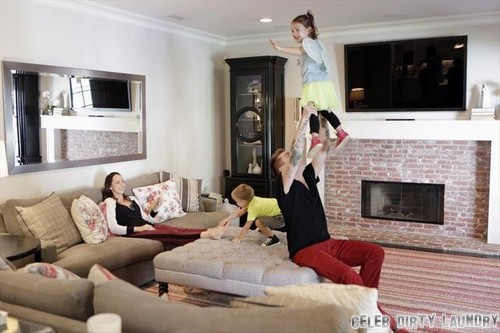 Celebrity Wife Swap might be a ridiculous experience for viewers, but that doesn’t mean it’s not entertaining. In fact, we think it’s borderline hilarious. The next crazy batch of celebrity’s to swap wives are rapper Coolio and 90s music superstar Mark McGrath. I think it’s fair to say, right off the bat, that these two musicians lead very different lives and will be in for a bit of a tough time. But, hey, you’ll have to check it out for yourself when it airs this Tuesday, March 5th! In case you missed the epic swap between Kendra Wilkinson and Kate Gosselin then click here to get the full recap before checking out the preview and spoilers for next week’s episode. [Warning: Spoilers Ahead!]

Here’s the official synopsis below:

Grammy(c) Award-winning rapper Coolio, his girlfriend, Mimi, and her three children — Majaniek (14), Javante (10) and Tariq (5) — live in a suburban community in Las Vegas. When he’s not touring or hanging out with friends, Coolio spends the majority of his time sleeping or relaxing at home, while Mimi works as a bartender and an exotic dancer, in addition to taking care of their home and raising her three children.
Mark McGrath, who is perhaps best known as the front man of the ’90s rock band Sugar Ray, and his wife, Carin, are parents to two-year-old twins Lydon and Hartley.
When self-sufficient Mimi arrives in Los Angeles, CA to swap lives with Carin, she is surprised to see a maid, a nanny and Carin’s parents — who live with them full time. Mimi is flabbergasted when she sees how the twins have complete control over the household. She also zeroes in on Mark’s “helicopter parenting” and thinks that his hovering over everyone’s interaction with the twins is a problem.
It’s a far cry from the standoffish behavior Coolio displays when Carin arrives: Sleeping the day away and hanging out with his friends, he spends little time at home with the kids or helping with the household duties. And when it comes time to implement her own set of house rules, Mimi discovers that Coolio is less than quick to accept her terms.
What do you think about Celebrity Wife Swap? Sometimes we remember that this even exists as a show and then we want to die a little bit inside; however, it is a fun show all around and we’re excited to see which C-list celebs they find for the rest of the season! If You Want More Hot Celeb Dirty Laundry News Then Please Like Us On Facebook and Follow Us On Twitter!