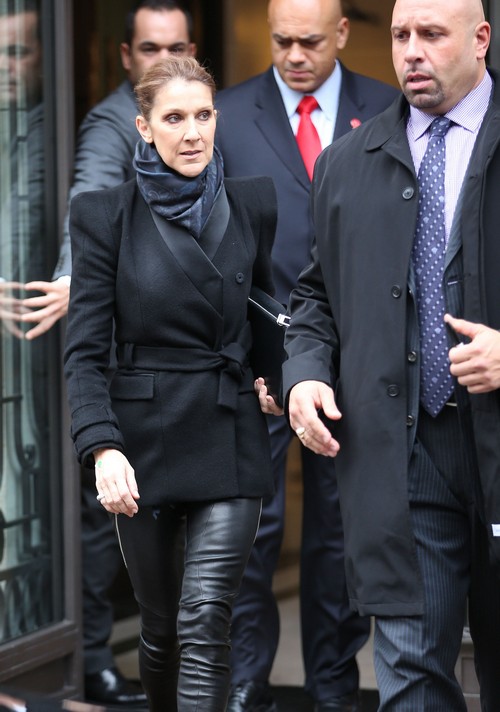 Things are looking really bad for Celine Dion right now. We first told you last week that her 18 year marriage to Rene Angelil is on shaky ground at best. The two have yet to publicly comment but Celine’s wedding ring is most definitely off (see pics below) and when spotted together in NYC there was clearly a chill in the air. Usually Rene would walk beside his wife but this time out he was trailing her and Celine looked like it was the absolute worst day of her life.

That bad mood wasn’t a fluke, as Celine was seen leaving her hotel in Paris, France this week and she still looked like she was in deep mourning. The Canadian singer is set to begin a European tour and at least as of yesterday, her husband appeared to be MIA. My guess is that he is traveling with her because he also functions as Celine’s manager, but that doesn’t mean that they are acting like husband and wife.

They say that picture’s tend to tell the real story and judging by Celine’s face in these, I think she is quite obviously going through one of the roughest points in her life. She has talked about her rocky marriage in the past, claiming that she and Rene had learned how to communicate better. By the looks of things that may have just been a temporary fix, don’t you think? Is there an announcement coming about the state of their marriage? Tell us your thoughts in the comments below!

Celine Dion leaves the Royal Monceau hotel in Paris, France to go to Anvers for her first and second European showa on November 21 and 22 – no wedding ring and looking might sad and stressed