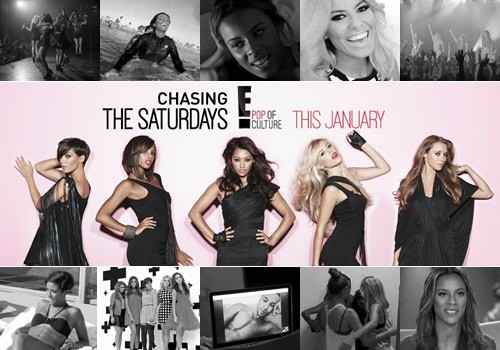 Tonight on E! the new docu-series “Chasing The Saturdays” premieres.  The show follows The Saturdays – UK’s hottest girl-group to take over the US in nearly two decades – set to wow American viewers with their fierce style, fun-loving personalities, and harmonic voices.

The group consists of Una Healy, Rochelle Humes, Mollie King, Frankie Sandford and Vanessa White and was formed in 2007.  The 10-episode series will chronicle both the personal and professional lives of these talented young women.

According to the official E! Entertainment synopsis: The series’ inaugural season focuses on the band taking up residence in Los Angeles where they will live, work and play together as they expand their incredibly successful music careers and break into the American music market.  As soon as The Saturdays arrive in style to their new home, they immediately head into the recording studio to begin working on their album — the first to be released internationally. Cameras will follow as they shoot the music video for their first American single, “What About Us,” featuring the Grammy-winning reggae artist Sean Paul.

Celeb Dirty Laundry had an opportunity to speak to The Saturdays bout where they see themselves in the music industry and what type of difficulties they encounter while doing their sold-out tours.  Check out our exclusive interview HERE!  To enter to win  an Awesome ‘Chasing the Saturdays’ Prize Pack go HERE!

Tonight’s season premiere is going to be exciting, and you won’t want to miss. So be sure to tune in for our live coverage of “Chasing The Saturdays” — tonight at 10PM EST! While you wait for our recap, hit the comments and let us know how excited you are about the premiere? Check out a Sneak peek video of tonight’s episode below!

Recap: The girls are off to the American Embassy to apply for visas because they are going to be in America for three month. Mollie called a Disney character by the other girls. Frankie has been in the music industry since she was eleven, it is all she knows. Una is from Ireland, she is married to Ben and has a baby girl. Vanessa is the youngest, she loves going out and the parties. Rochelle recently got married and her husband is in a boy band. The girls have always dreamed to be in America, they have one shot.

The girls were told that arrangements were made for them to stay in a luxury tower and when Mollie walks into the apartment, she loves it but her closet is small. Rochelle loves the kitchen and can see them making great meals there. Una has brought her mother with her and is worried about how she snores since she will be sleeping in the same room with her and the baby.

Frankie likes the suite but it’s not home and last year she suffered from depression and was hospitalized, it is something she is nervous about now. Mollie goes to Frankie’s room to give her support and to help build her back up. Frankie loves how Mollie is so positive, she always makes her feel better.

Una is on a video chat with Ben and the baby; they are all missing each other already.

The girls head out and the paparazzi follow them to the Newsroom to meet with their manager, Peter. He has a surprise for them, they are going to the VMA’s. The girls then head out to practice with Craig, their choreographer. Craig gives them all heck, he tells them that he is a guy and he can dance more girly than them.

Later that night, the girls are all getting ready to go to the VMA’s and they are so excited. For a UK girl, this is so glamorous and the red carpet is the biggest they have ever seen, it is so surreal. Tonight is going to be there first ever US performance and the girls are ready for it. Perez Hilton is there, he is apparently one of their biggest fans and poses for pics with him. Time to go, Perez Hilton introduces the girls and they are on stage and everything goes on plan.