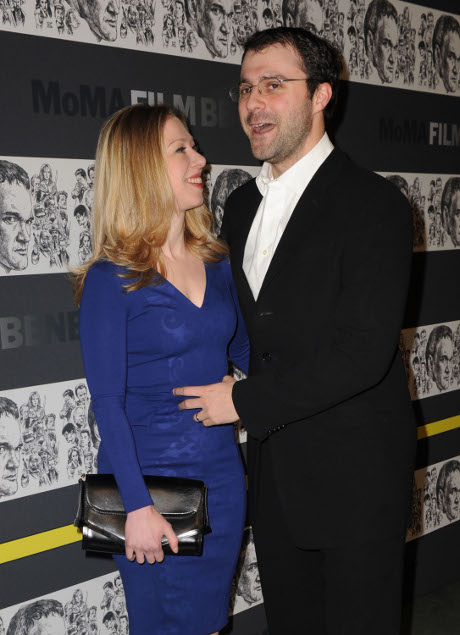 I don’t know where it comes from, but everyone seems to think babies solve all problems. Rocky relationship? Have a baby! Midlife crisis? Baby! Severely ill mother who moonlights as US Secretary of State? Grandbaby! That’s right—after Chelsea Clinton’s mom Hillary Clinton’s nasty run in with a blood clot and her father former President Bill Clinton’s failing heart health, the newly married Chelsea is hoping to pop out twins to ease the ache of the health woes. Chelsea married Marc Mezvinsky in 2010, but a baby only just came on their radar. Why the sudden urgency? Chelsea wants to give her parents the ultimate gift—grandchildren.

A family friend explained to National Enquirer, print edition January 14, 2013, “Chelsea’s ready to give IVF a go and Marc is supporting her decision. They both realize there is a better chance of a multiple birth with this treatment. Chelsea is very concerned with her mother’s life-or-death medical crisis and her father’s concerns about dying. So with luck, a birth announcement is just around the corner!”

In case you’ve had your head in the sand for a month, let me remind you that mom Hillary was admitted to a hospital after suffering a concussion and blood clot in the brain. And her father Bill, who has been struggling with his heart health, confessed last year, “I’m determined to live to be a grandfather. But I just think the older you get, the more you want every year to count.”

Chelsea’s parents are only in their sixties, but their declining health has caused the clock to go double time. After hearing about her dad’s longing for grandkids, Chelsea “cried and made it a priority to bring him a grandchild. In fact, Chelsea told Mark she’d even like to have twins. She also told a pal, ‘It would be a double blessing. Mom and Dad would be over the moon.”

Now, it makes sense that Chelsea loves her parents and wants her children to share them for as long as possible. But is their health so bad that it has to be this year? She and Marc were so set on waiting and enjoying each other. The rush to the delivery room doesn’t make sense—especially considering the early strains on their marriage, which resulted in them separating briefly! But all this baby talk . . . It makes me wonder if there is more to Bill and Hillary’s health woes than we’re hearing on the news! Is Chelsea Clinton pregnant? Do you think we’ll be getting a pregnancy announcement any time soon?