Chelsea Handler Slams David Letterman – On His Own Show! (VIDEO) 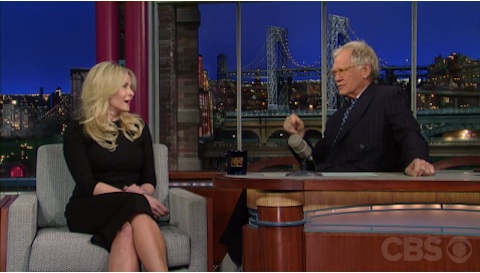 Chelsea Handler has always been one to speak her mind and her appearance on the Late Show with David Letterman was no different.

The late night TV scene has been in a state of change since it was announced that Jimmy Fallon would replace Jay Leno in 2014. And of course, the late night heavyweights were ready to get in on the current state of the late night landscape. Well at least Handler was.

“It’s a hot mess. No one can keep their job for very long it seems. You’re lucky to be here at CBS.”

And the first punch was thrown. Letterman came back with a humble block,

The next blow from Handler?

And the interview didn’t seem to be going anywhere after that comment, as Letterman put it. Was Handler taking a dig at Letterman’s stature as it relates to the late night scene? More like his actual stature (that’s what she says she meant at least).

“You’re not particularly large. You’re very dainty for a man, and I mean that in the nicest way possible. I mean…you’re fit.”

It’s that kind tough-love spirit that keeps Handler as a top contender and a force to be reckoned with.

But Letterman hasn’t held his title in the late night world by just taking things lying down, or rather passively sitting desk.

“You’re kind of hefty for a broad.”