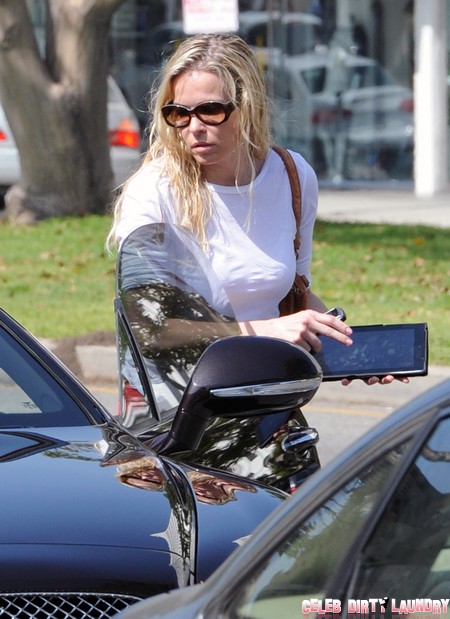 Another day, another inappropriate comment from Chelsea Handler. The first lady of late night (whose talk show Chelsea Lately airs on E!) spoke to Jay Leno on Wednesday about her boyfriend. She is dating hotelier Andrea Balazs again after a break up last year. Jay has interviewed Chelsea in the past, so he should have known better than to ask her about her love life. Chelsea’s response to being asked about her Valentine’s Day gift from her boyfriend was unusually sweet, even for her. She told Jay that Andre “wrote me this really beautiful book about our relationship. I mean, I don’t mean to sound gay, but it was very sweet, and I made him a scrapbook. It was just very nice. He’s a very romantic kind of guy, and I’m not that romantic, so I have to really get into the groove.”

I don’t know why anyone is surprised that Chelsea said something controversial. She built her career on being brash and over the top. What is surprising to her fans is Chelsea gushing over Andre. Chelsea is so giddy about her relationship she was telling everyone how happy she is with her long distance relationship with Andre. Chelsea told Ellen DeGeneres “I love him. He’s the best. It’s been rocky, but I’m trying to blossom into womanhood”.

You have to know Chelsea to understand why she probably chose to use a gay slur. Chelsea has been displaying her outrageous language and antics anytime, anywhere since she was a child. It’s in her DNA. Chelsea has used the word gay in a different context on her talk show.  She will call her frequent round table guest Jo Koy gay, though he is heterosexual, when she is ribbing him.  While interviewing Adam Levin she talked about her love for Irving Azoff. Chelsea told Adam (who is also a friend of Irving) she pesters him all the time with emails and even tells him he is gay. There was no backlash against her for using the word gay in this context on cable TV. However, using the word gay on Jay Leno’s show as an adjective was too much for a lot of people to handle. It would have been better if Chelsea chose a synonym like corny. Jay, his staff and the audience were mortified at hearing Chelsea use a slur. Of course Chelsea’s comment set off a fire storm of backlash on Twitter and other social media.

Chelsea is a huge gay rights advocate and has been a vocal supporter for years. I’m sure she meant no harm to her huge gay audience. However, Chelsea has to remember where she is being interviewed and that everything she says will be recorded. She won’t be able to take back anything she says that someone may deem harmful. Sometimes Chelsea will have to be a grown up, whether she likes it or not.