Cher Censored: Comments Get Mega-Bleeped Out by Dancing With the Stars – What Did She Say?! 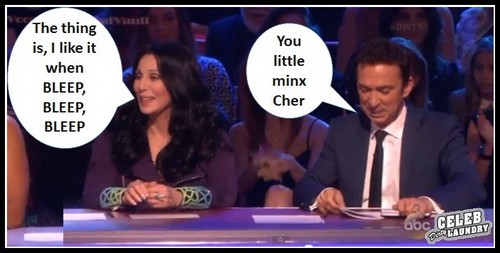 You had to know that when Cher sat down on the Dancing With the Stars judging panel there was going to be at least one serious soundbite coming out of the whole show for her that raised eyebrows. Unfortunately we all have no idea what that clip includes because Cher seems to have had the longest bleep out in network television history.

Elizabeth Berkley and Val Chmerkovskiy took the stage to perform a semi-hot routine to Cher’s version of Bang Bang. This was supposed to really smolder but for some reason the beginning struck me as kind of funny. Anyway, Cher really liked the fact that Elizabeth was cast as a bad ass in it and appreciated the whole strong woman vibe. She started to formulate her thoughts in detail and said,

“I thought it was great and it was rough and I liked the rough part of it… I liked when…” and then Cher was muted. What followed was a ten second bleep while Cher very clearly expressed a full thought that seemed to go on forever, probably because we couldn’t hear any of it. Elizabeth was prompted to thank Cher for spending her career pushing boundaries and inspiring women to embrace their sexy side.

I think we all want to know what it was that Cher really said and my guess is that later on today we’ll maybe get a slightly watered down version. Do you think that Cher purposely was inappropriate for television in order to get attention? Or was she just expressing her opinion and not really even thinking of the rolling cameras or network rules? Tell us your thoughts in the comments below!