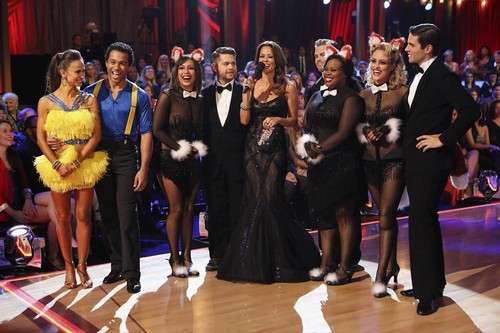 Tonight on ABC Dancing With The Stars returns with all the glitz, glitter and drama.  On tonight’s episode the competition heats up as the remaining seven remaining couples will compete in two rounds of dance and Cher will act as a guest judge.  Did you watch last week’s episode when the celebs learned an individual new dance and participated in a group dance?  We did and we recapped it right here for you.  If you missed any of the performances from last week, we have all the videos HERE for you to watch!

On last week’s show the night began with a spectacular opening number choreographed by Emmy Nominated choreographer, Mandy Moore. The competition was split into two rounds. In the first round, each couple took on a dance style they had not previously performed. In the second round, the cast danced together in two separate teams, with each couple having a featured solo. At the end of the night, Nicole “Snooki” Polizzi & her professional partner Sasha Farber were eliminated.

On tonight’s show the seven remaining couples will compete in two rounds of dance. In the first round, each couple will take on a dance style they have not previously performed including the Tango, Argentine Tango, Contemporary, Viennese Waltz, Jazz, Disco, and Foxtrot. The couple to receive the highest total score from the judges in this round will receive immunity and not be subject to elimination. In the second round, the six remaining couples will compete in a thrilling head-to-head “dance off” competition. The winning couples of the “dance off” round will be awarded additional Judges’ points that will be added to their overall score for the night.  At the end of the evening one couple will be eliminated.

RECAP: The show opes up with a fabulous performance by Cher who sings “Believe.”  The first couple dancing tonight is Corbin Bleu and Karina Smirnoff dancing  the Argentine Tango “Welcome to Burlesque”. Judges Comments: Carrie Ann “Last week you brought your A game and once again you have done it, the lifts took my breath away, but just watch your footwork.” Bruno “You got that woman wrapped around your little finger, your performance had depth to it, you need to watch your passes though.” Cher “I thought it was amazing of course, you were beautiful like the movie I recently seen called All About The Tango.” Judges Scores: Carrie Ann 9, Cher 9, Bruno 9 = 27 [VIDEO HERE]

Next up are Leah Remini and Tony Dovolani dancing the Viennese Waltz to “I Got You Babe.” Bruno “It was like watching Alice & Wonderland, lovely turns and lovely sweep, but be careful of the hold.” Carrie Ann “It looked like you were having the time of your life but there were a few moments were you got under the timing.” Cher “I am coming at it from a different angle, I was just enthralled that you could interpret what I went through at that coffee shop with Sonny, I thought it was great.” Judges Scores: Carrie Ann 8, Cher 9, Bruno 8 = 25 [VIDEO HERE]

Brant Daugherty and Peta Murga Troyd dancing the Fox Trot to “It’s In His Kiss.” Carrie Ann “You have star quality and you are still growing, every week I see you pushing yourself but your knees are going in too much.” Bruno “You have a lot to offer, your content is always flawless but to go to the next step you have to refine it, you got it within you.” Cher “I love your smiles.” Judges Scores: Carrie Ann 9, Cher 9, Bruno 9 = 27 [VIDEO HERE]

Elizabeth Berkley Lauren and Val Chmerovskiy dancing Jazz to “Bang Bang.” Cher ” I didn’t know what to expect, but I loved it.” Bruno “It was like the Hunger Games but you missed a lot of musical queue, you were not on it.” Carry Ann “You were under pressure, but you were one dimensional in your anger, you needed a little breath and that made it too loose for me.” Judges Scores: Carrie Ann 8, Cher 9, Bruno 8 = 25 [VIDEO HERE]

Bill Engval and Emma Slater dancing disco to “Strong Enough.” Bruno “You really got the disco inferno going, I was just gagging of laughter. You got the spirit going.” Carrie Ann “You have this magical effect, you make my day better. I love it even though you were off the beat.” Cher ” I was amazed that you could get her up in all those positions. Even though you missed some steps, I thought it was brilliant.” Judges Scores: Carrie Ann 8, Cher 8, Bruno 8 =24 [VIDEO HERE]

Jack Osbourne and Cheryl Burke dancing the Tango to “The Beat Goes On.” Carrie Ann “You are so confident and what a difference it makes, you are like a God out there, I loved that performance.” Cher “I thought it was great you looked like a pimp, like a tango dancing pimp.” Bruno “That is what the tango is all about, the pimp and the hooker, that was a proper classic tango.” Judges Scores: Carrie Ann 9, Cher 9, Bruno 9 = 27 [VIDEO HERE]

Cher gets a question from a fan, “where would you go if you could turn back time?.” Cher says she would go to the 80’s because she had lots of fun then.

Amber Riley and Derek Hough dancing the Rumba to “Turn Back Time.” Cher “You walked in sexy and I loved it, you owned it, you got it.” Bruno “That’s a girl on top, she knows what she wants and she gets it. You were the one selling it and I bought it.” Carrie Ann “When he touches you and rubs up your body it is awesome but I feel like it is not your best dance, you sitting back just a hair, I want more.” Judges Scores: Carrie Ann 9, Cher 9, Bruno 10 = 28 With the highest score tonight, they are automatically safe and will not be going home. [VIDEO HERE]

Cher is on stage again, this time she is singing “I Hope You Find It.”

It’s time for the Dance Off. Corbin and Karina get to pick the couple they want to dance off against, they choose Elizabeth and Val who choose the dance, the Cha Cha. Time for the dancing to begin; Carrie Ann thinks both nailed it, Bruno loved both as well, Cher thought both were sexy and tight.  All three judges vote for Corbin and Karina.

Time for the last round, Jack and Cheryl are dancing Disco against Bill and Emma. Carrie Ann says that Jack surprised her, Cher was amazed at Jack’s moves, Bruno thinks Jack turned disco into dirty dancing. All three judges vote for Jack and Cheryl.