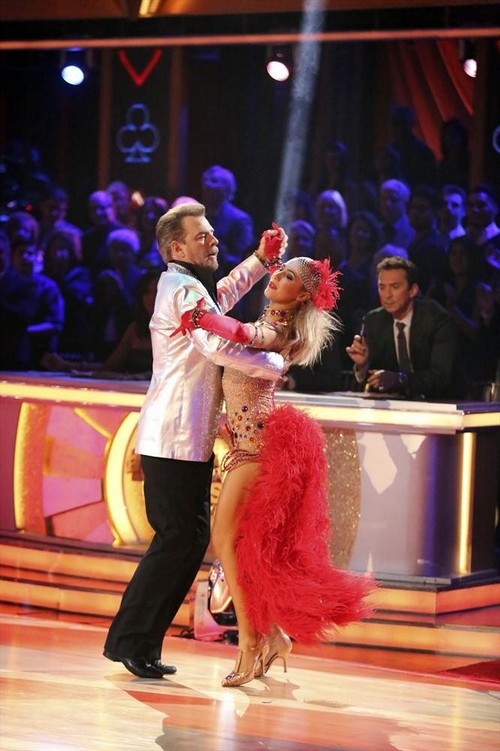 Bill Engvall danced a Disco Routine, on tonight’s episode 8 of Dancing with the Stars for a dance style he had not previously performed.  Check out Bill’s DWTS bio [CLICK HERE].  If you missed tonight’s show you can read a full and detailed recap, right here.

The seven remaining couples will compete in two rounds of dance. In the first round, each couple will take on a dance style they have not previously performed including the Tango, Argentine Tango, Contemporary, Viennese Waltz, Jazz, Disco, and Foxtrot. The couple to receive the highest total score from the judges in this round will receive immunity and not be subject to elimination. In the second round, the six remaining couples will compete in a thrilling head-to-head “dance off” competition. The winning couples of the “dance off” round will be awarded additional Judges’ points that will be added to their overall score for the night.

On last week’s show Bill was given a 23/30 for his Quickstep routine.  Carrie Ann said: “The good new is you did not break hold.  But the hold was not strong enough for the dance.  I give you credit it was a challenge.”   If you missed any of last week’s performances, you can check out all the videos, right HERE.

Bill Engvall and professional dancer Emma Slater: dancing a Disco.  Emma tweeted their fans for help today, “So close now till we dance our #Disco!!! Please help @billengvall & I, u can vote by calling 18008683409 or at abc. Com thank u!”

Judges comments: Bruno “You really got the disco inferno going, I was just gagging of laughter. You got the spirit going.” Carrie Ann “You have this magical effect, you make my day better. I love it even though you were off the beat.” Cher ” I was amazed that you could get her up in all those positions. Even though you missed some steps, I thought it was brilliant.”