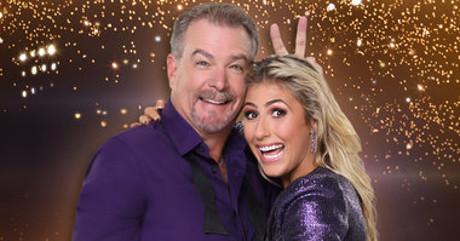 Meet Bill Engvall, the newest cast member for Season 17 of Dancing with the Stars. Bill is Grammy nominated recording artist with several multi-platinum selling records, AND he’s one of the best comedians in the country.

He doesn’t have too much going on right now [apart from the CMT animated show Bounty Hunters], which is probably why he decided to take the check and agree to star on Dancing with the Stars. He previously produced and starred in The Bill Engvall show, which is finding new life among viewers and fans thanks to launching now international star Jennifer Lawrence‘s career.

According to his official bio, “Engvall was part of the enormously successful Blue Collar Comedy concert films, which sold over 9 million units and received a Grammy nomination. He also starred on the WB’s hit sketch comedy show Blue Collar TV and in several solo specials for Comedy Central. In 2012 he reunited with Jeff Foxworthy and Larry the Cable Guy on the Them Idiots Whirled Tour, which aired as a special on CMT.

Engvall’s first album, Here’s Your Sign, is certified platinum and held the #1 position on the Billboard Comedy Chart for 15 straight weeks. His second album, Dorkfish,also debuted at #1 on Billboard’s Comedy Chart, as did his subsequent comedy albums. Engvall has written several books, including his 2007 autobiography Bill Engvall –Just A Guy.”

Engvall will be starring alongside Emma Slater, who joined Dancing with the Stars in Season 14 in early 2012. Will you guys be rooting for Bill and Emma, or do you have other favorites in mind? Let us know your thoughts in the comments. For more DWTS news CLICK HERE.