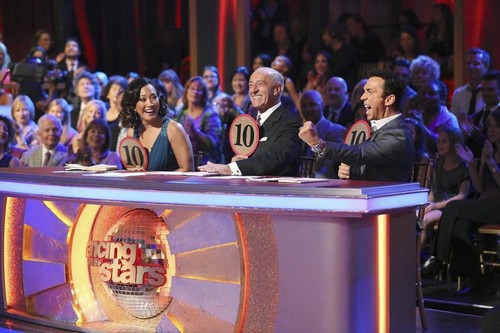 Tonight on ABC Dancing With The Stars returns with all the glitz, glitter and drama.  On tonight’s episode the competition heats up as the remaining couples learn two new routines.  Did you watch last week’s episode when the celebs danced to to a new routine faced a new challenge?  We did and we recapped it right here for you.  If you missed any of the performances from last week, we have all the videos HERE for you to watch!

On last week’s show the eight remaining couples hit the dance floor and faced an exciting new challenge. Each couple had to compete in an individual dance style they have not yet done as well as take part in the first ever “Switch-Up Challenge.” In this fresh take on a dance marathon, couples competed side by side, in two rounds, with no prior knowledge of dance style or musical accompaniment.  By the end of the night, one couple was suppose to face elimination.  BUT, we learned at the end of the show that due to a technical glitch no one would be eliminated.

On tonight’s show the night will begin with a spectacular opening number choreographed by Emmy Nominated choreographer, Mandy Moore. The competition will then be split into two rounds. In the first round, each couple will take on a dance style they have not previously performed including the Salsa, Quickstep, Samba, Cha Cha, Paso Doble, and Jive. In the second round, the cast will dance together in two separate teams, with each couple having a featured solo. At the end of the night, one couple will face elimination.

Judges Comments: Len said, “That was a UFO – utterly full on, flying around the floor, full of content.  That’s the way to start a show. “ Bruno said: “No need to panic, the aliens are not coming.  I loved it, what a good job.  The reason you lost body contact was because of the speed.”  Carrie Ann: “It was fantastic.  What I noticed is how you have grown.  I see your becoming the ballroom dancer, the holds are developing.  Val you did a great job teaching her.  You are a great dancer and you are still growing.”

Judges comments: Bruno said, “No more candy for you, you were like a frisky school boy.  But I tell you that was a full loaded jive, of course you lost timing a bit.  But overall good.”  Carrie Ann said, “I love seeing a hunky guy not take himself serious.  What I love is you did not miss one step.  Great job!”  Len said, “It is right now you have to dance full on and full out and that is what your did you came out and did it.  I love your energy, attack and enthusiasm!”

Judges comments: Carrie Ann said: “You are in the zone, my dear.  That was like going to the hottest Salsa club and you were the hottest Salsa dancers.”  Len said: “I loved it you kept my attention, you came out and gave it your all.”  Bruno said: “You gave me the real flash of a good Salsa, loved it.”

Judges comments:  Len said: “What I like is that you have great musicality and you are light on the feet.  I would have liked it to be a bit more crispy.  Well done Jack, you are always great.”  Bruno said: “She really did not make it easy for you.  There is a great charm watching you dance, the performance flow was perfect.  Be careful with your flicks and kicks.”  Carrie Anne said: “You are Brant are very different – you both did different jives.  What you did tonight was perfectly suited for you.  Everything was just perfect!”

Judges comments: Bruno said: “That was like vintage wine, full of depth and color.  You danced with the attack of a demon.  A tiny problem with your shoulders.”  Carrie Ann: “You slayed the beast again.  When you came out I was stomping.  You were from hot to cold to intense. You lit this ballroom up.”  Len: “You captured the flavor of the dance. Every nuance in that music was picked out.  You are back in the game.”

Judges comments: Carrie Ann said: “The good new is you did not break hold.  But the hold was not strong enough for the dance.  I give you credit it was a challenge.”  Len: “It had speed and energy.  If I judges with my heart you would get a 10.”  Bruno: “You rolled the dice and tried the best.  A very good try.”

Judges comments: Len said: “I think to dance at that speed to keep it under control was amazing.  Well done.”  Bruno: “It took a while, once you got in the Samba flow it was good.”  Carrie Ann:  “You have to stop dancing like a Chihuahua.  Think a little bigger.  Just extend you movements a little more, because you are a little short.”

Judges comments:  Bruno said: “The sun is shining on Corbin, but in form.  Cystal clear form.  Brilliant!”  Carrie Ann: “This week that was the tightest cha cha I have ever seen.  Your posture was right.  It was hot!”  Len said, “Lovely, crisp footwork, nice legwork, I am not a fan of the gyrating.  For me gyrating comes between rap music and a baby crying. But I thought you did an excellent cha cha.”

Judges comments: Len said: “I thought the parts together were tight and the individual routines were great.  Nicole you were fantastic.”  Bruno said: “I never thought you could have so much fun with the walking dead you worked with what each couple could do best.”  Carrie Ann: ” It was fairly entertaining.  Bill you were the glue that held that together.”

Judges comments: Bruno said: “You sly little foxes that was so clever, the choreography gave me goosebumps.  Corbin you killed it.”  Carrie Ann: “I feel like I was on an acid trip.  You gave me acid trip.  Your choreography was in sync, Corbin you did kill it but the Fox was awesome too.”  Len: “It was full of little foxes that made it awesome.  I tell you what I salute both teams.”