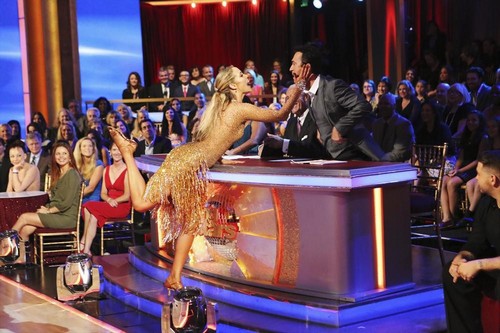 Elizabeth Berkley  danced a Quickstep routine, on tonight’s episode 7 of Dancing with the Stars for a dance style she have not previously performed.  Check out Elizabeth’s DWTS bio [CLICK HERE]  If you missed tonight’s show you can read a full and detailed recap, right here.

On last week’s show Elizabeth was given a perfect score a 30/30 for her Cha Cha Cha routine.  Bruno said this about her dance, “You still got it big time, so sexy that it just killed me. Apart from that, it was so clean and so sharp, it was brilliant.”  If you missed any of last week’s performances, you can check out all the videos, right HERE.

Elizabeth Berkley and professional dancer Val Chmerkovskiy: danced a Quickstep.  Elizabeth tweeted this about tonight’s performance, “Tomorrow nite, @iamValC and I are up first with our Quickstep! Xoxo”

Judges Comments: Len said, “That was a UFO – utterly full on, flying around the floor, full of content.  That’s the way to start a show.” Bruno said: “No need to panic, the aliens are not coming.  I loved it, what a good job.  The reason you lost body contact was because of the speed.”  Carrie Ann: “It was fantastic.  What I noticed is how you have grown.  I see your becoming the ballroom dancer, the holds are developing.  Val you did a great job teaching her.  You are a great dancer and you are still growing.”

Watch the video below and let us know what you think? Do you think Elizabeth did enough to avoid elimination next week? Sound out in the comments below!