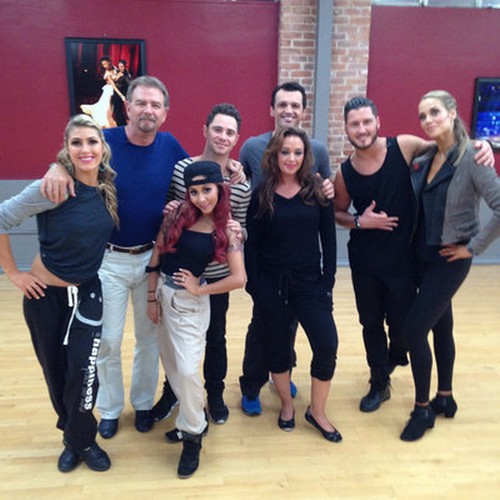 In the second round of DANCING WITH THE STARS tonight the remaining eight dancers were split in teams.  Team SpookyBomBom was comprised of Bill Engvall and Emma Slater, Nicole “Snooki” Polizzi and Sasha Farber, Leah Remini and Tony Dovolani and Elizabeth Berkley Lauren and Valentin Chmerkovskiy.

Team SpookyBomBom danced to  “Bom Bom” by Sam and the Womp.  In the team dance the cast will dance together in two separate teams, with each couple having a featured solo.

Tonight was a tough night for the couples they had to learn two routines.  In the first round each couple took on a dance style they have not previously performed including the Salsa, Quickstep, Samba, Cha Cha, Paso Doble, and Jive.  If you missed any of the videos tonight.  You can see them all right HERE.

Use the hashtag of the team you’re rooting for, in this case #SpookyBomBom – the results will be shown LIVE on Monday! At the end of the night, one couple will face elimination.

Judges comments: Len said: “I thought the parts together were tight and the individual routines were great.  Nicole you were fantastic.”  Bruno said: “I never thought you could have so much fun with the walking dead you worked with what each couple could do best.”  Carrie Ann: ” It was fairly entertaining.  Bill you were the glue that held that together.”

Watch the video below and let us know what you think? Do you think SpookyBomBom did a good enough job?  Sound out in the comments below!