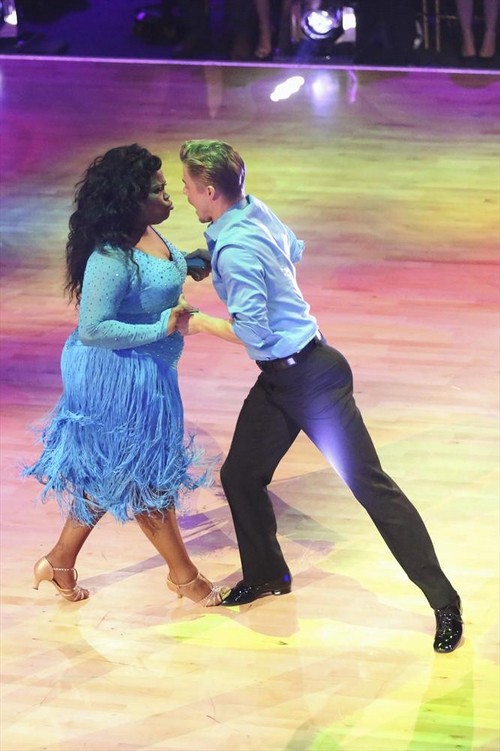 Amber Riley danced a Paso Doble, , on tonight’s episode 7 of Dancing with the Stars for a dance style she have not previously performed. Check out Amber’s DWTS bio [CLICK HERE] If you missed tonight’s show you can read a full and detailed recap, right here.

On last week’s show Amber was given a 28/30 for her Foxtrot routine.  Carrie Anne said this about her performance, “I loved the dance, every time I watch you I think fierce. What you did was awesome, every move drove me insane, it was a turn on.” If you missed any of last week’s performances, you can check out all the videos, right HERE.

Amber Riley and professional dancer Derek Hough: dancing a Foxtrot.  Amber tweeted this about tonight’s performance, “So excited about tomorrow, wondering what this surprise is – goodnight yall”

Judges comments: Bruno said: “That was like vintage wine, full of depth and color.  You danced with the attack of a demon.  A tiny problem with your shoulders.”  Carrie Ann: “You slayed the beast again.  When you came out I was stomping.  You were from hot to cold to intense. You lit this ballroom up.”  Len: “You captured the flavor of the dance. Every nuance in that music was picked out.  You are back in the game.”