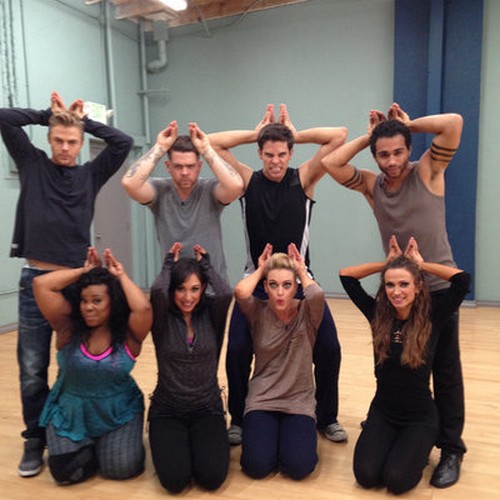 In the second round of DANCING WITH THE STARS tonight the remaining eight dancers were split in teams.  Team FoxingAwesome was comprised of Amber Riley and Derek Hough, Jack Osbourne and Cheryl Burke, Brant Daugherty and Peta Murgatroyd and Corbin Bleu and Karina Smirnoff

Team FoxingAwesome danced to “What Does the Fox Say?” by Ylvis.  In the team dance the cast will dance together in two separate teams, with each couple having a featured solo.

Tonight was a tough night for the couples they had to learn two routines.  In the first round each couple took on a dance style they have not previously performed including the Salsa, Quickstep, Samba, Cha Cha, Paso Doble, and Jive.  If you missed any of the videos tonight.  You can see them all right HERE.

Use the hashtag of the team you’re rooting for, in this case #SpookyBomBom – the results will be shown LIVE on Monday! At the end of the night, one couple will face elimination.

Judges comments: Bruno said: “You sly little foxes that was so clever, the choreography gave me goosebumps.  Corbin you killed it.”  Carrie Ann: “I feel like I was on an acid trip.  You gave me acid trip.  Your choreography was in sync, Corbin you did kill it but the Fox was awesome too.”  Len: “It was full of little foxes that made it awesome.  I tell you what I salute both teams.”

Watch the video below and let us know what you think? Do you think SpookyBomBom did a good enough job?  Sound out in the comments below!