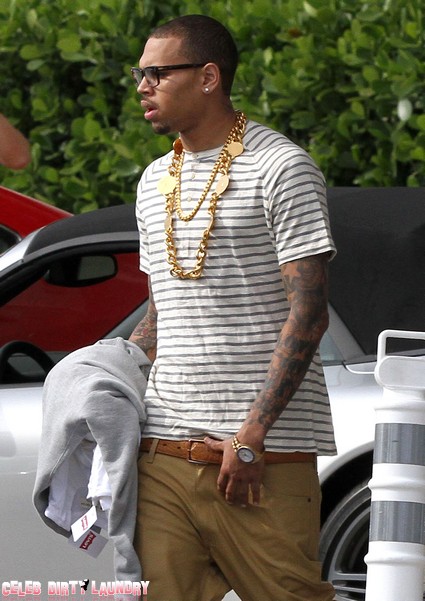 According to well… everybody Chris and his body guard were taken and booked on felony assault charges Sunday morning from a fight that happened in front of the W Hotel in Washington D.C..  Brown and another man, Christopher Hollosy, were allegedly involved in a “physical altercation” with an unidentified man just before 4:30 a.m. in front of the W Hotel in the 500 block of 15th Street NW, according to a police department spokesman, Officer Anthony Clay.

Brown, 24, was in Washington to host a “homecoming party” at The Park at Fourteen nightclub Saturday night, according to his Twitter feed, just four blocks away from where he was arrested Sunday morning. This arrest could very well be seen as a probation violation resulting in jail time (which isn’t such a bad idea considering the source). As I’m reporting this to you Chris “Breezy” sits easy breezy beautiful in a jail cell awaiting to see a judge Monday morning.

For those of you who live under a rock Chris Brown has been on probation since 2009 when he kicked his then girlfriend Rihanna’s ass after the Grammy Awards. Mind you Chris is supposed to be off probation in Aug. 2014. One might say Chris has been working hard to change his crazy “man-child” image. Well outside of busting a window after a Good Morning America interview, a bar fight with Rihanna’s other “cuddy buddy” Hip-hop artist Drake, a fight with homosexual R&B crooner Frank Ocean, a recent interview with Jet magazine where he uses music/business mogul Shawn “Jigga Lips” aka “Camel Joe” aka “Jay-Z” Carter criminal past to justify his own tacky behavior. Let’s also forget when he took to twitter threatening Jay-Z with retaliation from an L.A. Bloods Gang for derailing a Beyoncé /Chris Brown collab. Not to mention all the hateful messages, gay slurs, and wreckless tweets he’s blessed us with in-between deactivating and reactivating his Twitter account.

Most recently his probation being revoked and him being sentenced to an additional 1,000 hours of community service. Stemming from a hit and run accident this past August. Not to mention there has been some concern that Chris never initially completed the 1400 hours he was supposed to served when first reprimanded. Word is although the hours were signed of on. Chris hadn’t actually completed a lot of them by not showing up for assignments. Chris responded to his new punishment by calling the judge’s decision ‘vindictive” and with these pearls of wisdom “Community service, that s–t is a b-tch. I’ll be honest – and you can quote me on that – that is a motherf–ker there. For me, I think it’s more of a power trip for the DA. I can speak freely now, because I don’t really care what they say about it, but as far as, like, the 1,000 extra hours they gave me, that’s totally fricking bananas.”

So since nobody wants to say it allow me to speak bluntly. Obviously this “man-child” is suffering from an inflated ego, a false sense of entitlement, and in need of a swift kick in the ass. The legal system has a habit of slapping these celebrities on the wrist which eventually they become immune to. It’s time for a reality check.

He chooses to run around acting like a wild animal then put his ass in a cage. It’s clear that this baby is a couple sandwiches short of a picnic and needs his under-done ass sent right back to the kitchen. You want to help him see the error of his ways ? Force him to sit in a 4×6 cell with three hots and a cot for about a year. With some anger management and some drug and alcohol counseling. Now that’s a recipe for some humble pie. Yet I digress and I guess will learn Chris’s fate within these next few weeks seeing as that he’s due for a “probation status hearing ” in front of an L.A. judge Nov. 20.