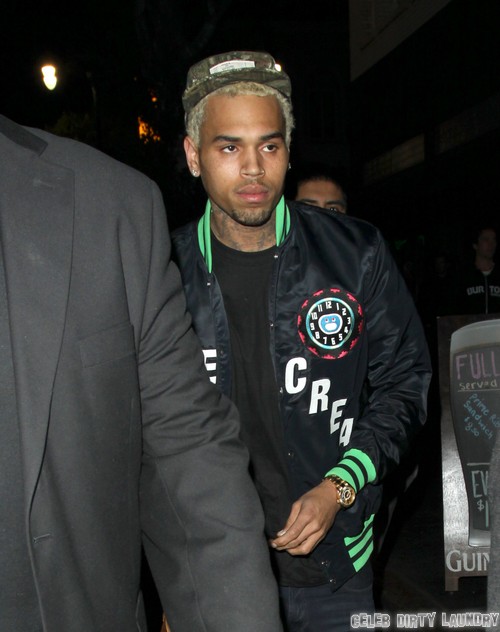 Chris Brown might be in a world of trouble if he gets his probation revoked as a result of performing some fraudulent community service in the Rihanna beating case. It’s about time someone thinks about actually sending this fool to jail. He seriously should’ve done some jail time in the first place from the assault on Rihanna. But alas, he got off with some minor amount of community service. Ugh, so sickening.

According to TMZ, the District Attorney in Los Angeles has already filed the documents stating that Chris is in violation of his probation in the assault case. And why, you might ask? It’s all because of some allegedly bogus community service records. We say “alleged”, but we know that there is some truth to the claims. Shady mofo.

Chris was sentenced to do 180 days of community service, but had completed a reported 202 days. The Chief of Police in Richmond, Virginia wrote to the judge stating that Chris was all done with his requirements. He said that Chris completed his work at Tappahannock Children’s Center. TMZ reports:

Norwood attached documents showing that Brown frequently worked at Tappahannock Children’s Center — a place where Brown’s mom was once a director — and did odd jobs such as painting, washing windows, waxing floors, cutting grass and picking up trash.

The judge was suspicious when the document was filed, and sources tell us the D.A. began investigating and found no “credible, competent or verifiable evidence” that Brown did the 180 days community service.

Sources tell TMZ … there’s no way Chris could have performed community service on some of the days, because he was out of the country doing concerts.

The D.A. calls Chris’ documentation “at best sloppy … and at worst fraudulent reporting.”

The D.A. is asking the judge to reject Chris’ alleged Virginia community service hours and make him fulfill his obligation in L.A. County.

We are still of the mind that Chris should be tossed in the pokey for nearly beating Rihanna to death. Rihanna, of course, is a moron, too, for taking his sorry butt back. We cannot fathom that at all. Ugh. What do you think? Hit the comments and let us know your thoughts!