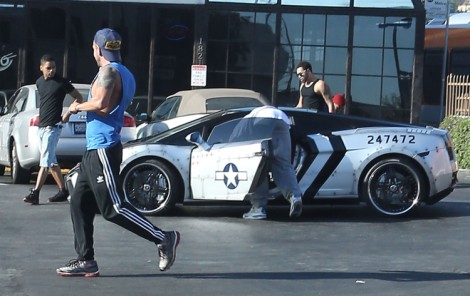 Chris Brown’s friends continued to look like tools yesterday when they were caught picking on the elderly at a Subway in Hollywood. Feel free to reread that sentence. Gross.

According to FameFlynet, Brown’s friends started causing a stink at the fast food restaurant because they didn’t want to pay for extra meat on their sandwiches. They started harassing an elderly woman that works there because apparently they wanted to “Have it their way” but thankfully an elderly good Samaritan wasn’t taking their punk s-it. He stood up to them and the lame ass posse turned all their harassment on him. Keep following me, if gets better.

Then ANOTHER good Samaritan stepped up. He’s the young, beefy looking dude wearing the blue shirt in the pics. The young dude told Chris’s friends to lay off but they started to pick a fight and got him outside the Subway where they continued to taunt him with racial slurs. Luckily for them, Chris showed up in his Lamborghini with his bodyguard who got out of the car and started chasing the young Samaritan around with a stun gun. Cops eventually showed up and broke up the scene. I have no idea if the losers got in trouble for their dumb ass behavior.

Does this surprise anyone? True, Chris didn’t start the fight but he was more than willing to pull up and let his bodyguard chase a lone guy around with a stun gun. WTF? What is wrong with these people? This from the guy who’s supposedly reformed; supposedly doesn’t beat women anymore; supposedly has controlled his anger issues. I’d bet Drake has something to say about that.

But when is it OK to harass an elderly worker at Subway? Where I come from, I’d get yanked if I didn’t open a door fast enough for an elderly person. God knows what my parents would have done if they heard me make a smart comment. And Chris Brown and his lame ass friends and I are in the same age range. It’s just gross and shows such a lack of class and respect. It’s boys thinking they are men. It’s ignorant people trying to act big. It’s children with no f-cking lives.

I was stoked when I saw that sticker reading “WARNING: DO NOT BUY THIS ALBUM! THIS MAN BEATS WOMEN” on Chris Brown’s new CD. He deserves all the sh-t he gets because when you read about the Subway incident you realize he isn’t reformed and probably never will be.