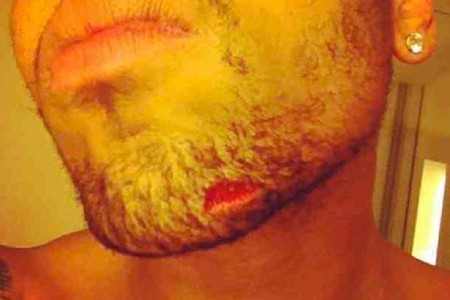 Rihanna’s former boyfriend, Chris Brown, got jacked up pretty bad in a fight with her other former boyfriend, rapper Drake at the NYC nightclub WIP early this morning. The anger-challenged Chris posted this picture on his Instagram account a few hours ago with the caption, “Bottles? It’s nothing! LOL.”

That gash doesn’t look funny AT ALL. Brown originally tweeted, “How u party wit rich n**** that hate? Lol… Throwing bottles like girls? #shameonya!” but that has since been taken down, according to TMZ.

TMZ confirmed that the two singers’ entourages got into a brawl with 5 people minorly injured. Chris and Drake were already gone by the time NYPD came to the scene around 5 am.

Although stories are whirling at the moment, MediaTakeOut.com reports the fight started when Chris sent a bottle of champagne over to Drake’s table as a quasi peace offering since the two have been talking shit over the past year.  Unconfirmed reports say that Drake sent the bottle back as a kind of “F-ck you.” Well, we all know Chris doesn’t take rejection well and he confronted Drake and another rapper, Meek Mill, who oddly enough, also allegedly had a relationship with Rihanna. Drake punched Chris and MediaTakeOut’s sources say someone else jumped in and smacked Chris with a bottle resulting in him gushing blood from his chin. Security jumped in before much more could happen.

This has got to be over Rihanna, right? Obviously the two singers don’t like each other for various reasons and have been caught twitter fighting like little bitches in the past months. What do you think? Should Rihanna feel flattered she caused the two to finally come to blows or is this just a case of alcohol and entourages encouraging bad behavior?