Rihanna Hits Out At Chris Brown’s Girlfriend With Racist Insult 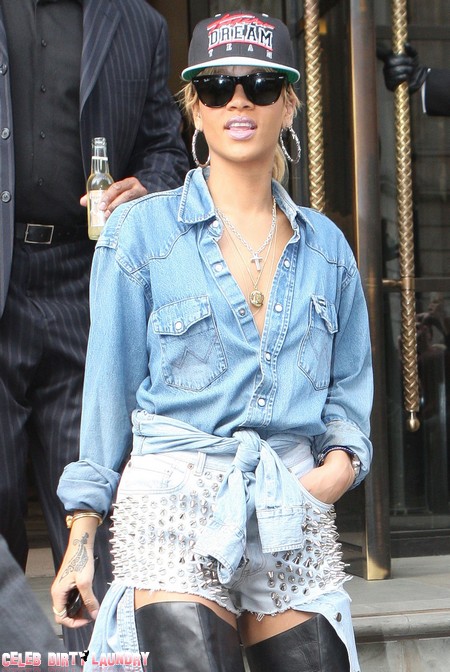 Rihanna is embroiled in a nasty war of words with Chris Brown‘s girlfriend, Karrueche Tran.  Rihanna is insanely jealous of Tran since she thinks that Tran stands in the way of her and Chris getting back together.  Rihanna made a racist attack on Tran’s Asian background when she tweeted a photo of a bag of rice cakes wearing sunglasses and gold earrings along with the caption ‘Ima a make you my bitch.’  Rihanna is way way out of line here and shows that she is a truly disgusting human being, having been the victim of a racist attack herself recently – and even if she hadn’t been, she should know better.

In fact a magazine editor was fired over supposed racial slurs that she allowed to be printed in Jackie Magazine.

BANG reports:  The ‘You Da One’ singer – who dated Chris until he assaulted her in February 2009 – appears to have been sending a series of subtle insults at his current girlfriend, Vietnamese model Karrueche Tran.

Earlier this week, she tweeted a photo of a bag of rice cakes wearing sunglasses and with gold earrings, with the caption, “Ima a make u my bitch,” which many have interpreted as a jibe at Karrueche.

When a follower then tweeted “@rihanna save me some rice cakes rather hungry,” she hit back with the comment: “Kinda DRY tho.”

Karrueche is then said to have replied via posts on Facebook, writing: “Let me clear the air, if you have fenty at the end of ya name or your default Is Rihanna you have a better chance of winning the lottery than ending up on my friends list. (sic)”

However, the model has since denied she has a Facebook page.

This hasn’t stopped Rihanna, who continued to post messages on twitter last night (07.03.12) writing lyrics from a Lil Kim and Mobb Deep’s track, reading: “I’m a leader, yall on some followin s**t … coming in dis game on some modelling s**t.”

Although they split in 2009, recently Rihanna and Chris have been seen at a number of the same events, and he appeared on a sexually explicit remix of her track ‘Birthday Cake’.

A source told Us Weekly magazine: “Rihanna loves to live dangerously, and talking to and hooking up with Chris is all part of that.”

Rihanna recently told UK TV host Jonathan Ross she misses being in a relationship, saying: “You want to share your life with someone. That’s what I’m missing right now.”

Rihanna and Chris are both examples of what can go wrong when low-brow thugs gain wild success.  Their behaviour gets worse and worse all of the time and yet their fans adore them.  What do you think?  Do Chris and Rihanna deserve each other?  Let us know in the comments below.