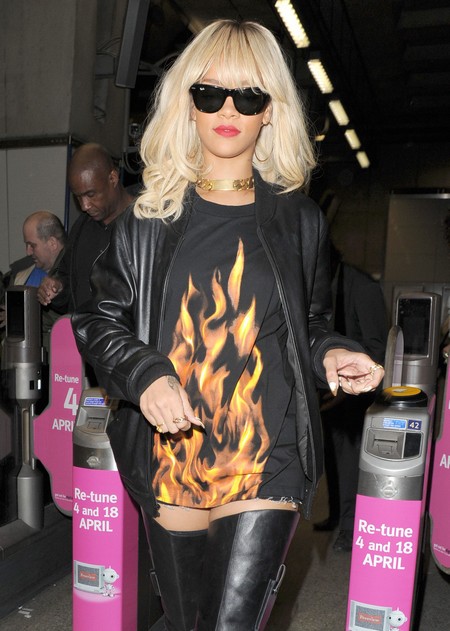 It hasn’t even been a week since Chris Brown released a song where he verbally beat Rihanna’s face in, but this week Drake decided to go ahead and just do the same thing. Looks like Chris and Drake are double teaming poor Rihanna – a girl just can’t no respect!

On a song called ‘No Lie’ featuring rapper 2 Chainz, Drake just straight out insults Rihanna – she’s just being destroyed.  If Rihanna dropped/unfollowed Chris from Twitter for his diss then God only knows what she will do about Drake’s – its even worse!

The lyrics say, “She came through, she brought food she got f**cked, she knew wassup. She think I’m the realest out and I say damn, that makes two of us. Oh that look like what’s her name chances are it’s what’s her name, chances are if she was acting up then I f**cked her once and never f**cked again. She could have a Grammy, I still treat that ass like a nominee just need know what that p*ssy like so one time it’s fine with me.”

I’ve always called Drake a horrible rapper and this right here is proof.  Back in the day, rappers never aimed diss tracks at women that were so obvious. You’d expect Drake to at least be mature for his age but he’s just acting like a child, he really needs to grow up and write lyrics that actually have a purpose. Since when did Hip Hop turn into a whiny untalented rappers’ use of bitching? As a man, Drake is just a straight up, an embarrassment.

Guess we won’t see Christina Aguilera hooking up with Drake any time soon.  We know that she was pretty verbal about disrespecting women to Adam Levine and Tony Lucca on The Voice recently. She did not approve of their selection of Jay-Z’s song ‘99 Problems.‘ Let us know what you think in the comments below.