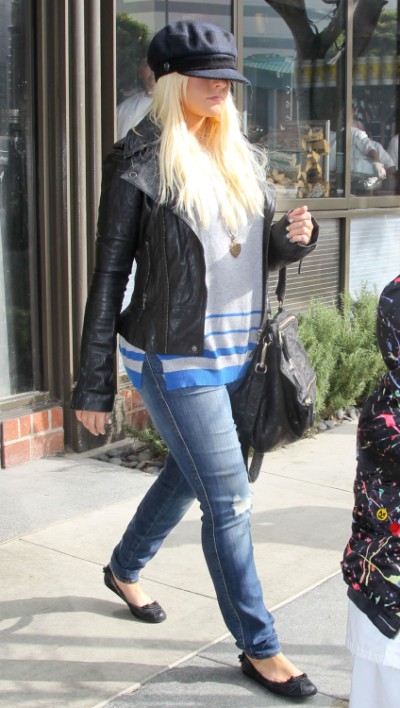 Can you believe Christina Aguilera is still with Matthew Rutler? Who you ask? That scrub production assistant she latched onto right after she divorced Jordan Bratman in 2010. Oh, he’s not a scrub. I know nothing about the dude other than the fact that like Jessica Simpson and Britney Spears’ pieces he doesn’t do much other than act as a companion and accompany her to In-N-Out burger and Starbucks. But there must be love in there somewhere especially since rumors are flying that they are ready to take their relationship to the next level.

No, I’m not talking about marriage – yet. I’m talking baby bumps! Christina Aquilera has been seen around town with a noticeably thinner physique and, some are saying, a bun in the oven.  I don’t see it. But I never see these things. It could be true. She’s been with this dude for awhile and her son, Max Bratman, is already four so maybe she’s in the mood for another. Perhaps Kim Kardashian gave her baby fever! It could be the reason why she lost all that weight recently. TMZ has a new story out highlighting her new waistline. Some women try to get super healthy before they get out those pregnancy jeans again. Personally that’s the last thing I’m thinking about when I finally manage to squeeze into my skinny jeans again but that’s just me. To each his own.

So what do you think? Is Christina Aguilera pregnant? Does Rutler have what it takes to go the distance with the diva? I’d much rather see her create another album than a child but I’m just selfish like that. I miss jogging to Christina’s music! She’s taking time away from The Voice so let’s wait to see what she has in store. Will it be a new baby or some new songs?