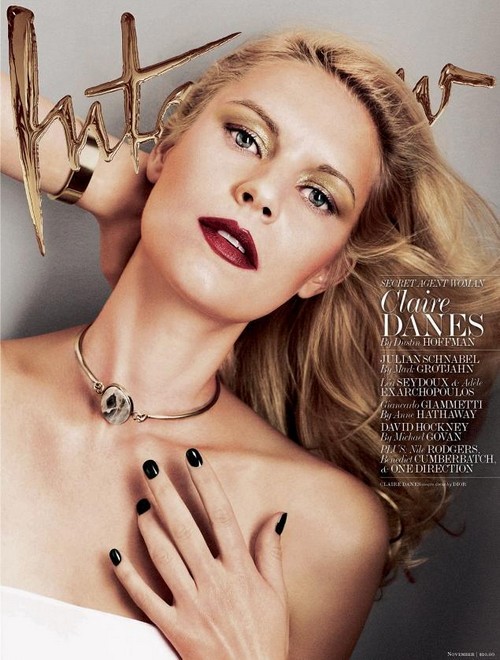 Claire Danes covers the latest issue of Interview Magazine, and as usual, she’s smart, insightful, and uninteresting. As Celebitchy states very accurately, Claire may be really talented and smart, but she’s ridiculously boring on page.

In the interview, she discusses the usual topics at hand, i.e. motherhood and Homeland. She discusses the state of Carrie’s mind at the beginning of the current Season 3, explaining, “At the beginning of this season we’re in now, she’s a different kind of manic—an agitated manic—and all of those manic scenes just happened to be lumped together in the same couple of days at the very beginning of filming. At the time, I had a 6-month-old son, and I was in a completely antithetical state of being. I had just come out of my mommy cocoon and my cushy, mushy love planet. So entering that mania at that point was not as enjoyable.”

It has always been interesting to me how actors manage to separate their private and public lives and emotions when acting. There are people who do it seemingly effortlessly, like Jennifer Lawrence and Emma Stone. And then there are people who go ‘full method’, i.e. Christian Bale and Daniel Day-Lewis. Claire seems to fall somewhere in-between both of those groups, and I can see how it would have been difficult for her to switch off her new mom side, and go into crazy Carrie mode.

Other than that snippet, and her comments on doing research for bipolar disorder, this interview is more or less a re-hash of everything she’s said before. Homeland is very fulfilling, bla bla, she’s blessed to be playing Carrie, bla bla. See: Boring.

What do you guys think about Claire’s interview? Do you find it boring, or do you think she’s just playing it safe so she doesn’t risk offending anybody? Let us know in the comments.