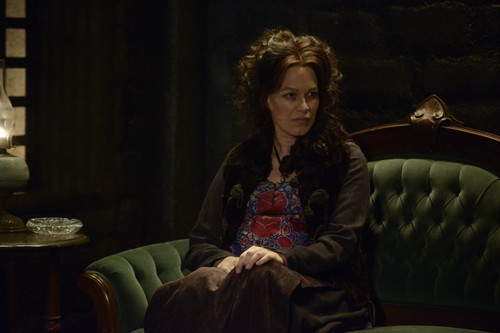 Tonight on the BBC COPPER continues with a new episode called, “The Fine Ould Irish Gintleman.”  On tonight’s show the Freemans struggle to maintain their freedom and well-being while confronting bigots in their community.  Did you watch last week’s show?  We did and we recapped it for you.

On last week’s show returning to the Precinct, Detective Kevin Corcoran was staggered when he discovered a new investigation had one close to him in chains. Racing to free his friend, Corcoran sought help from those in power. However, General Brendan Donovan was consumed by an upcoming, major political and business move. Meanwhile, Doctor Matthew Freeman approached Robert Morehouse to suggest a joint effort to aid the city.

On tonight’s show Detective Kevin Corcoran begins to question General Brendan Donovan’s stronghold in the Five Points community, and solicits coppers of the Sixth Precinct to suss out the truth. In a collision of public and private spheres, Robert Morehouse’s marriage creates strife in his business ventures. The Freemans struggle to maintain their freedom and well-being while confronting bigots in their community.

Tonight’s episode is going to be another fabulous one, which you won’t want to miss. So be sure to tune in for our live coverage of BBC’s Copper Season 2 Episode 10 “The Fine Ould Irish Gintleman,” tonight at 10 PM EST!

Gentrification is the name of the game. The death of Eva’s victim has put the episcopal church to protest with psalms outside of her notorious establishment. To get peace as he calls General Donvan has Kevin and the rest if the coppers close down her pace of business. As for the mother of his child he sent her a lawyer. A very expensive lawyer that she’ll only be able to pay if she sold the real estate agent that came along with the visiting lawyer. Leaving Eva completely out of work, home, and stable finances.

Meanwhile the general’s bid for construction was just approved. He has the sole bid and will most likely make a lot of money. Mr. Morehouse is quick to congratulate him and even invites him over a celebratory dinner at his son’s home. The very home that shelters the newly addicted Elizabeth. Her stringer opium has her passed out onto the floor.

Her husband wasn’t there to pick her up. He was meeting Matthew. However his charms don’t work this time. Matthew knows that when it counts Robert can never be depended on. Especially when he’ll lose money by helping to save hundreds of lives. Robert wants to be a better man but he always finds it easy to hide in brandy.

The witness, Ms. Trembly, has found herself an admirer. Francis wants to woo her but she’s haughted by the alderman’s death. Francis’s need to help reminds him how he was with a girl from his past. Not Kevin’s wife. A girl from Ireland. That’s why Teresa is so appealing to him.

Kevin is suspicious of Donovan. With help from Matthew he learned that Eva’s victim was murdered at the hospital. Taking his evidence he tries to get a straight answer from Eva on Donovan’s dealings but she warns him not to take on the general. Kevin guessed Donovan was the father. Alright he won’t be able to take the general on his own. He goes to Robert for assistance instead. Although he doesn’t have any concrete proof. If Robert helps then he’ll finally be sticking his neck out for his “friends”.

Like a violin, Robert plays Donovan over drinks. He tells the dinner guests how the Bartlett family have asked the governor to reopen a certain case close to Donovan’s heart.

Kevin in the meantime goes over to Matthew’s house. He does find the Doc or Sarah. He finds Hattie. He takes the time to say thank you to her for helping with his wife’s funeral. In particular since it was his race that lynched her sons. Yet she’s remains optimistic or so he thought. Hattie was optimistic. She was starting to settle down when Kevin spilled the beans. She didn’t know her sons were butchered.
She lashes out on Sarah. She believes this vile city has turned her daughter into a cold hearted liar. Nothing Sarah or Matthew can say will get through to her. Hattie is set on leaving Five Points.

Robert didn’t fully trust Kevin’s belief in Donovan shadiness. It took Mr. Morehouse to explain everything. The constituents that voted Donovan into power are about to be displaced with Donovan’s new aqueduct. Then the five points would be rebuilt in whatever image he demands.

Donovan orders Francis to kill Teresa. What she witnessed must never come to light. He claims it’s for the good of the city. How else can Donovan and his group of friends carry on with their noble work? Despite his past history of killing women, Francis doesn’t want to kill Teresa. He’s falling in love with her.

Before she goes, Hattie calms down. She realized she had a false dream of the north and had sacrificed her children to it. She forgives her daughter. Matthew who was left by himself though has to deal with the shop owner he threatened last week as well as with the guy’s friends. Hattie is moving on to sfer destinations but she left Matthew in danger.

Francis finally turns to Kevin and O’Brien. He fill them in on everything. While he was talking to them, Donovan calls in Teresa to “talk”. The guys race to get the witness safe only to find she’s no longer at the safe house. Teresa was already dead by that time.