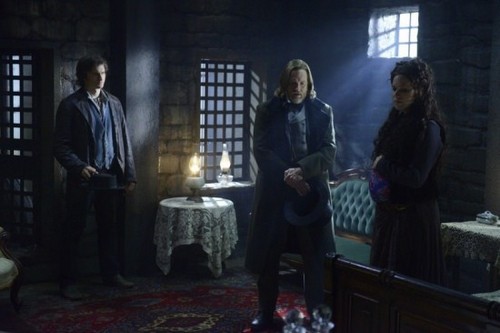 Tonight on the BBC COPPER continues with a new episode called, “Think Gently Of The Erring.”  On tonight’s show Doctor Matthew Freeman approaches Robert Morehouse to suggest a joint effort to aid the city.

On last week’s show The greater COPPER family – Uptown and Five Points alike – gathered around Detective Kevin Corcoran, who was reeling from a shocking loss. In a quest to cure the illness sweeping Five Points on a grander scale, Doctor Matthew Freeman stepped beyond his role as physician. Robert Morehouse found himself fighting to ensure that a tumultuous chapter of his past was dead and buried, and that he and his loved ones lives would continue to thrive.

On tonight’s show Returning to the Precinct, Detective Kevin Corcoran is staggered when he discovers a new investigation has one close to him in chains. Racing to free his friend, Corcoran seeks help from those in power. However, General Brendan Donovan is consumed by an upcoming, major political and business move. Meanwhile, Doctor Matthew Freeman approaches Robert Morehouse to suggest a joint effort to aid the city.

Tonight’s episode is going to be another fabulous one, which you won’t want to miss. So be sure to tune in for our live coverage of BBC’s Copper Season 2 Episode 9 “Think Gently Of The Erring,” tonight at 10 PM EST!  While you wait for the episode, check out a sneak peek of tonight’s episode below!

Kevin is only now waking from his drunken stupor. Two weeks after he buried his wife. He didn’t even what day it was but it’s good that his friends woke him up; he’s going to be needed.

Eva’s brothel was running along just fine until some brute of a drunkard attacks one of her girls. Eva tried to get him to leave and he refused by threatening her with a knife. Well Eva doesn’t take threats well so she uses the man’s knife to stabs him in the eye.

She gets taken into booking around the same time Kevin returns to the precinct. He has taken to the governor’s cell but she’s worried. If they hang her then they kill her baby as well. Kevin promises to help free her but if her victim dies then it’s up in the air. No matter what promises he makes.

Meanwhile Dr. Matthew is doing his best to stop an epidemic in 5 points. He can’t get an article printed that could help save lives so he brought it to his old friend, Robert, for help. Robert offers to help but his father snatched the papers right out of his hand before he burned them. Mr. Morehouse doesn’t why Robert would help Matthew to begin with.

Instead of being deterred, Robert returns to Matthew and he tells him he’ll still help and a word of advice. Its best draft up two new copies.

Kevin goes to General Donovan with enough evidence to get Eva bail but he’s denied. It is election year. The general can’t afford to upset the rich right now. Especially not over a glorified pimp. At least there’s good news. Well there was good news. The man Eva attacked was suspected to live but someone, as of yet unknown, smothered the guy in his sleep. Someone wants Eva to die.

Kevin is with her when she finds out the news. He says he’ll still help and in a moment of desperation or need Eva instigates some comforting jail sex.

General Donovan has picked his moments of generosity. He helped Detective Andrew O’Brien free his brother-in-law from the tomes in exchange for Seamus working on the new sewage system. So it seems things can be done during election year as long as he gets free labor. The general is working with Mr. Morehouse and the two have and will continue to do all that they can to see though their profitable plans. People disappearing and dying all so coincidentally only serves to help their cause.

Robert was supposed to meet a world renowned doctor that could help him with Matthew when the man had come upon Elizabeth. A drunk and slovenly Elizabeth. The doctor was disgusted after seeing her. He refused to listen to any of Robert’s plans. Robert is upset with her although he’s worried more. He sees her early signs of addiction. He got her to agree to give it up.

Matthew doesn’t even know the bad new yet he already has a public meltdown. His mother-in-law, Hattie is just not adjusting to the freedom and the restraints of the north. She provoked a fight with a shop keeper. Matthew got involved and nearly beat the shop keeper. Sarah pulled him away but not before their family was threatened.

Although she promised Elizabeth got her hands on more opium for a dealer.
General Donovan is the father of Eva’s baby. As a last ditch attempt she tried to use her baby’s paternity to get out of jail. Donovan however warned that he has many enemies that could and would hurt her if she ever revealed the truth. Odd are he could become his own enemy if he had to in order to get rid of the child.

All this time he has pretended to be one for the people but he has used detectives as personal executioners. Francis know how much he owes him so he doesn’t question why he has to kill so many of the general’s political rivals. To him its merely a job.