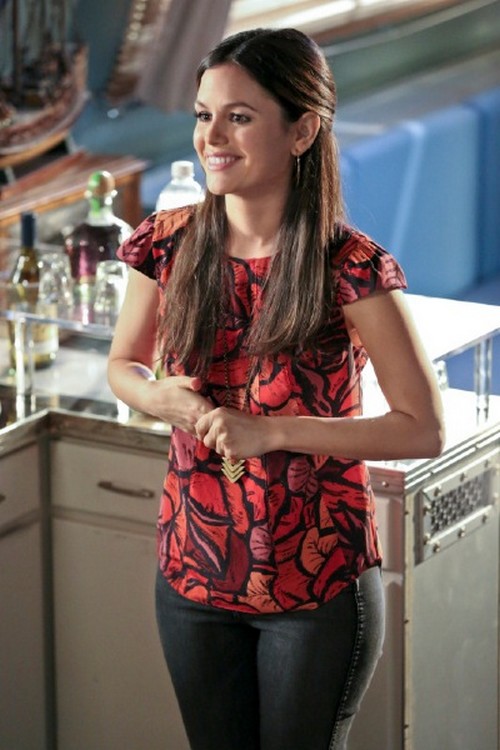 Tonight on the CW HART OF DIXIE returns with a new episode called, “I’m Moving On.” On tonight’s show George (Scott Porter) tries everything he can think of to prove to Tansy (guest star Mircea Monroe) that they belong together, but she still has her doubts.  Did you watch last week’s episode? We have a full and detailed review here for you!

On last week’s episode after Zoe tricked Jonah  into spilling a secret about Brick, she unintentionally made things worse for Brick in his love life. Following Brick’s advice, Zoe decided she must finally express her feelings, but timing never seemed to be her strong suit. Wade and Lemon had to learn to work together, but things went awry when they each tried to prove that they knew what is best for the new Rammer Jammer. Knowing what Wade and Lemon were up to, Lavon and AnnaBeth agreed to not get involved, but that might be easier said than done. Meanwhile, Tansy’s brothers surprised her with an unexpected visit, leaving George to look after them and put up with their wild antics.

On tonight’s show ACCEPTING HELP / ROB HUEBEL (‘CHILDRENS HOSPITAL’) GUEST STARS — Zoe’s (Rachel Bilson) attempts at online dating hit a few snags until Rose (guest star McKaley Miller) and Max (guest star Nicholas Podany) take matters into their own hands and play matchmaker. Faced with yet another set back with the Rammer Jammer, Lemon (Jaime King) and Wade (Wilson Bethel) are close to throwing in the towel. George (Scott Porter) tries everything he can think of to prove to Tansy (guest star Mircea Monroe) that they belong together, but she still has her doubts. Brick (Tim Matheson) and Shelby (guest star Laura Bell Bundy) decide that they might have acted too rashly, which forces them to make a difficult decision about their future together. Meanwhile, Lavon (Cress Williams) refuses AnnaBeth’s (guest star Kaitlyn Black) help in stopping the feud with the competing town’s Mayor, leaving her to take a different tact. Janice Cooke directed the episode written by Donald Todd.

Zoe is trying to explain herself to George that she was just having a crazy moment. She apologizes and admits she started an online dating profile.

Lemon and Wade are reviewing the damage they made to the Rammer Jammer on last week’s episode. When they, more Lemon, brings in a handy man; they find out they have more of a problem that a fallen ceiling.

George tells Tansy about Zoe’s confession. He ties to quickly reassures her that it was momentary lapse that won’t happen again. Although it doesn’t stop his girlfriend from having some misgivings about Zoe.

Brick tells his daughters about his engagement. He then hits them with the other facts surrounding the engagement. Like proposing before he went into surgery to remove a brain tumor. Also that Shelby was runaway girlfriend. It’s safe to say the girls aren’t pleased with their father right now. No matter how he tries to spin it.

Zoe meets up with her online date. Who may be thinking it would lead to casual sex due to an error on Zoe’s profile. Who does she end up meeting but no other than …Meatball. Before she can wiggly herself out of the date from hell, the ceiling on the Rammer Jammer starts raining down in chunks.

Rose and her boyfriend go to Zoe to ask her to chaperone the prom. The previous chaperones dropped out. But Zoe had a bad experience with her own prom and anyway she’s dateless. All the dates she’s been going on remind her of her exes.

Lavon and Anabeth are working down main street when the awful smell of garbage stops in their tracks. The neighboring town dumped all their garbage right on the border of Bluebell.

Brick’s youngest, Magnolia, can’t go to prom. Why? Because she got a nose piercing. She had it done right after Brick’s announcement. Instead of driving a wedge, Brick instead tells Shelby that they’re a team now. Also help him with Magnolia.

Tansy went and did her and George’s star charts. It helps with the Zoe dilemma. But something is off with George’s birth date. He just doesn’t want to tell her and get her upset again.

Zoe goes to dinner thinking she’s the third wheel with Rose and her date however the kids set Zoe up with one of their dads.

At the Rammer Jammer, Wade brought someone in to look at the ceiling. Unfortunately for him the guy tricks him and runs off with money from the cash register.

Max’s dad and Zoe had an actual pleasant date. Nevertheless they don’t schedule a second date.

Lemon walks into the restaurant to find Wade holding up the ceiling beam. Surprisingly enough she doesn’t get as mad as she usually would. She’s going to fix by asking her dad for help. But brick did tell Shelby that she’s allowed to partake in family business. Before Brick can sign a check, Shelby gives her own point of view. Lemon should fix things by herself.

Lavon retaliates against the other town’s mayor by dropping off his own garbage. Annabeth tries to tell Lavon that he needs stops this feud before it escalates.

Tansy is taking her psychic business to far. She’s throwing away George’s shirts and thinking they should move. George reaches a breaking with his girlfriend’s crazy and finally tells her that she got the time for his birth wrong. Stupidly he doesn’t realize that this piece of new would tick off Tansy.

Zoe and Wade run into each other when he begins to make snide remarks about her dating life. She flounces off but not to stay at her house. No, she’s going to prom.

At the prom, Magnolia manages to spike the punch.

Tansy is still angry. He almost succeeds in diffusing her when Zoe arrives.

Shelby catches Brick trying to leave the house. She knows he’s going to give the money to Lemon. He tells her that sometimes people don’t run away when they’re needed. Apparently Brick isn’t over Shelby fleeing.

Zoe destroys her chances with Max’s dad. No worries though, he only agreed to their first date because Max and Rose were worried about Zoe. The dad’s doesn’t want all the drama that comes with dating Zoe Hart. As he’s practically running off the dance floor, drunk-on-punch Tansy believes now would be the perfect time to confront Zoe.

In the middle of the dance floor, Tansy tears into Zoe until she cracks and creates a scene. Max’s dad kicks her out of Prom because she brought too much drama.
Anabeth and the other mayor’s wife meet up to create a truce. It could have gone wrong what with Annabeth asking an alcoholic to meet up with at a bar but they were able to set down some terms.

Tansy left prom too when George catches up with her. He tells her to trust him but she’s can’t fully. Still there is a way. She wants him to leave Bluebell with her.

Lemon and Wade are pity drinking when lucky for them Lavon brings in some townspeople to help fix up their bar.

Brick apologizes to Shelby for bringing up her running shoes. In his mind, if they were only married he wouldn’t worry anymore. So they both agree to just get married already. Possible not in Bluebell because of his kids.

Lavon is in a good mood after Anabeth tells him what she did when George walks in. He and Tansy broke up.

Zoe needs some comforting after prom so she propositions Wade.

On next week’s promo, George walks in on Zoe and Wade. In the middle of her romantic confusion Zoe also gets a job offer in New York. With three options to choose from, which will she take?