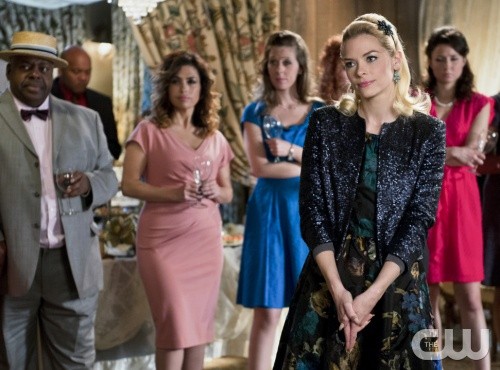 Tonight on the CW HART OF DIXIE returns with a new episode called, “If Tomorrow Never Comes.” On tonight’s show Wade (Wilson Bethel) and Lemon (Jaime King) must learn to work together, but things go awry when they each try to prove that they know what is best for the new Rammer Jammer. Did you watch last week’s episode? We have a full and detailed review here for you!

On last week’s episode when the town decided to put on a performance of Shakespeare’s most iconic scenes, George and Zoe refused to play Romeo and Juliet, but eventually agreed just to prove to everyone that they were over each other. Lemon and Wade were excited about taking over the reigns at the Rammer Jammer, but things came to a halt when they lost all the staff two days before opening. Meanwhile, Brick decided to offer a week of free counseling to everyone in BlueBell and wound up helping the two most unlikely people, but in his effort to help others he learned a secret he had been keeping from himself.

On tonight’s episode after Zoe (Rachel Bilson) tricks Jonah (guest star Travis Van Winkle) into spilling a secret about Brick (Tim Matheson), she unintentionally makes things worse for Brick in his love life. Following Brick’s advice, Zoe decides she must finally express her feelings, but timing never seems to be her strong suit. Wade (Wilson Bethel) and Lemon (Jaime King) must learn to work together, but things go awry when they each try to prove that they know what is best for the new Rammer Jammer. Knowing what Wade and Lemon are up to, Lavon (Cress Williams) and AnnaBeth (guest star Kaitlyn Black) agree to not get involved, but that might be easier said than done. Meanwhile, Tansy’s (guest star Mircea Monroe) brothers surprise her with an unexpected visit, leaving George (Scott Porter) to look after them and put up with their wild antics. Jim Hayman directed the episode written by Alex Taub.

On tonight’s episode, Zoe is depressed and eating over George and Tansy. Guess she wasn’t over him after all. But after nearly choking to death, she may rethink her strategy. She instantly goes over to Lavon’s. Seeing Annabeth and Lavon happy isn’t helping her especially when she tells them about her near choking. She

Wade and Lemon are having a difference of opinions about their first income from the bar. Lemon wants to upscale the place while Wade wants to turn it in a sports bar.

Jonah is back. Brick is consulting with him over a patient. Which only serves to incense Zoe when she finds out. However Brick refuses to discuss the patient with her. Later she manages to squeeze or better yet the truth out of Jonah. Apparently the patient is Brick and he has a tumor.

George and Tansy are experiencing their first relationship drama after moving in together. Not only have Tansy’s brothers come to visit but they also think to stay with the couple.

Brick and Zoe talk about the tumor. She thinks he should tell his daughters but he doesn’t want to worry them.

Tansy’s brothers are proving to be a handful. Tansy has to hide some of George’s breakables and valuables. In an effort to get to know them, George agrees to take her brothers to lunch.

Lemon is still fuming after her ordeal with Wade. She’s venting to Annabeth when Annabeth comes up with a plan to help. Lemon is holding an impromptu belle’s meeting at the restaurant.

Still worried about Brick, and her own future, Zoe goes to Brick girlfriend to see how she’s doing. But what she ends up doing is freaking the woman out. Jonah shows Zoe the goodbye letter that the girlfriend wrote saying Zoe had helped her think things through.

George is at the lunch. He has to reign in the brothers who are juvenile and one of whom is very drunk.

Zoe and Jonah are hunting down Shelby. No matter what they want to get Shelby back and by Brick’s side.

Lemon’s little plan for the restaurant goes awry. Why? Because Lavon gave Wade the exact same advice Annabeth gave Lemon. Lavon and Annaveth both know what’s going to happen but choose to stay out of it in sake of their relationship.

After Tansy’s brothers get kicked out of Wade’s place, George has had enough of them and leaves. But he does warn Wade to hide his car.

Zoe finds Shelby. A little blackmail and intimidation gets Shelby to agree to coming back.

Wade and Lemon are each trying to get rid of the other so that their individual revenge plans comes off. Even though Annabeth and Lavon both said that they’d stay out of it; they warn their friends about what the otherside has planned.

Tansy is mad at George for ditching her brothers. She decides to go after her brothers before they find trouble. Not long after she storms off that George gets a call from the Sheriff. Tansy’s brothers are in jail.

Mix Martial Arts and Wine Tasting don’t mix. Lemon and Wade have both sabotaged the other.

Zoe, Jonah, and Shelby are in Brick’s hospital room trying to cheer him up before surgery when Brick does the unexpected. He proposes to Shelby… and she said yes. Jonah and Shelby are both mad at Zoe.

Annabeth and Lavon are worried about their friends. They rush to the restaurant to see what they can do. No worries. The restaurant is actually doing well. The mixed events have come together to make the biggest night for the restaurant.

If only this didn’t fill Wade and Lemon with confidence. They try to make room for all of their ideas in a DIY project. What does this cause? They created massive damage to the foundation of their place. They also can’t afford it.

George bails out Tansy’s brothers. Tansy, who’s relieved, is also happy to not be mad with George anymore. But she does warn her brothers to act right or else she’s calling Mama.

Just before Zoe tells Brick about Shelby wanting out; in walks Shelby whose tells Brick how excited she is to be engaged. Jonah is now even more upset and taking it out on Zoe. Those two are worried about how to still tell Brick. Zoe agrees to do it.

She tells Brick but he’s ok with it. It seems that Shelby admitted to Brick what happened. He’s still going to marry her because he’s willing to risk it in order to be happy. This unfortunately inspires Zoe to admit her feelings to George. He only gets mad with her for choosing now. Too little too late.

On next week’s promo, it looks like George told Tansy what Zoe did. How are they’re supposed to get along when they’re all chaperones for the prom? Trouble.