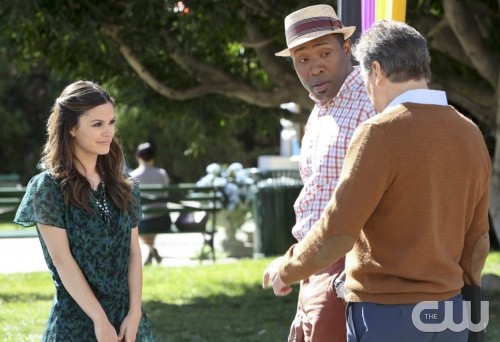 Tonight on the CW HART OF DIXIE returns with a new episode called, “This Kiss.” On tonight’s show Brick (Tim Matheson) decides to offer a week of free counseling to everyone in BlueBell and winds up helping the two most unlikely people, but in his effort to help others he learns a secret he has been keeping from himself.. Did you watch last week’s episode? We have a full and detailed review here for you!

On last week’s episode Lavon’s big plans of making BlueBell a Spring Break destination hits a roadblock when the competing town tried to lure the partiers away. With the help of Ruby Jeffries, Lavon created a competition that was bound to attract some attention. Eager to join in some much-deserved fun, Zoe agreed to give partying a try with Jonah, but seeing them together made George jealous.

On tonight’s show when the town decides to put on a performance of Shakespeare’s most iconic scenes, George (Scott Porter) and Zoe (Rachel Bilson) refuse to play Romeo and Juliet, but eventually agree just to prove to everyone that they are over each other. Lemon (Jaime King) and Wade (Wilson Bethel) are excited about taking over the reigns at the Rammer Jammer, but things come to a halt when they lose all the staff two days before opening. Meanwhile, Brick (Tim Matheson) decides to offer a week of free counseling to everyone in BlueBell and winds up helping the two most unlikely people, but in his effort to help others he learns a secret he has been keeping from himself. Cress Williams also stars. Bethany Rooney directed the episode written by Leila Gerstein.

Everyone is waiting for breakfast. Why? Because Wayne and Lemon haven’t opened up their place yet. Zoe and George find out they can’t get the New York Times anymore when George convinces the proprietor to keep selling them. Happy about the paper the two share an awkward hug before Zoe quickly leaves.

Tansy heard the entire exchange and finally confronts George over his feelings toward Zoe. He assures her that he doesn’t have any more feelings for Zoe.

It’s mental health week for Bluebell. Dr. Breenland is in charge. No one wants take any advice from Zoe. Lavon who needs some relationship advice decides to go and see him meanwhile Zoe gets a recommendation to see him. She doesn’t think she will until later on she wakes up from a nice sex dream about George.

Lemon and Wayne opening their restaurant in two days when they find out they don’t have any staff. In their rush to order new staff they meet a couple of crazy people but haven’t their fit just yet. So each take it upon themselves to hire someone behind the other’s back.

Zoe is meeting Brick and describing her dream when he automatically knows she’s talking about George. He tells her not suppress but to simply lay off for a while to give herself clarity.

Lavon is avoiding something when he’s talking to Brick. He leaves before he could reveal anything. Zoe spots Tansy coming in the office and flees with Lavon to lunch. Unfortunately at lunch Zoe unwittingly get picked to replace Tansy as Juliette in town play. When she gets there she finds instead of avoiding George. She’s playing Juliette to his Romeo.

Zoe goes to Brick to tell him about the newest mistake she’s made. Hopefully if they put their two heads together they can find a way for Zoe not to kiss George. But apparently George also doesn’t want to kiss her. He doesn’t want to hurt Tansy.

Lemon and Wayne’s opening is going fine but the cook Lemon hired can’t cook grits. When Wayne unintentionally insults the chief, he quits.  So who’s going to cook?

Lavon finally tells Brick what he’s scared about his part in the play. He doesn’t want to look silly in front of Anabeth. Brick is avoiding something or better yet someone.

Lemon who replace the chef can’t keep up with the orders. Wayne is already pointing fingers that its her fault when they find out the waitress he hired is under the legal age. The sheriff has to report them but they might lose their liquor license because of it.

Zoe and George try to speak to the director about a different ending but he refuses. Going to plan B, they try to replace their characters with other actors. In order to do so, Zoe has to watch their bees for them. That goes bad and she’s running away after leaving the bee cage open.

Lemon and Wayne are sitting in their empty restaurant when the former owner comes in to give them some words of wisdom. That little talk gives them their fighting spirit as they try to save their license. One problem though. When they get to the office they find only the crazy lady they rejected earlier working there.

Brick is Lavon with his stage fright.  In the middle of visualizations, Lavon sneaks off.

Zoe is back doing the play but she doesn’t know that across town Tansy is guilt tripping George into rejoining the play. At the play George tells Zoe he has to kiss her or else Tansy will be pissed.

Blackmailed into hiring the crazy, Lemon and Wayne get their liquor license back.

Lavon tells Anabeth the truth but she already knows. She after all remembers his past performance. So he decides to be in the play again. It’s time for the kiss scene. Zoe tries to change the scene but George doesn’t allow her to so then they kiss. Going by her reaction, Zoe felt something from that Kiss.

Everyone is at the after party at Wayne and Lemon’s. The crazy lady seems to be doing alright.

Brick returns home to tell Shelby about why he was avoiding her. Whatever he told her it must be good.

Zoe apologizes to George over the scene. She also tells him she didn’t feel anything after the kiss. But after finding out Tansy and George will be living together, she appears to still have some feelings.

On next week’s promo, Brick is in the hospital. Everyone is worried when Zoe finds out Shelby might have done a runner.