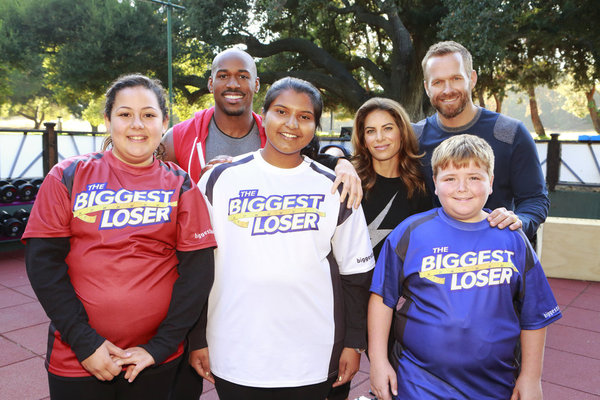 Tonight on NBC THE BIGGEST LOSER returns for the second part of its two night premiere of Season 13.  On tonight’s show called “Get Moving” NFL star Antonio Gates guest stars.

On last night’s show the white team lost the weigh-in, there was a red line and the person with the lowest percentage of weight loss was sent home be going home. The person who headed home in week 1 was TC. This was unbelievable, this guy deserved to be there and this was all Nikki’s fault. TC felt really great about himself, like he had a breakthrough and didn’t think he deserved to go home. Jillian gave TC a pep talk, then it was hugs for everyone and he was gone home. The good news, we got to see glimpse of TC and he lost another 41 pounds at home on his own.  Did you watch  last night’s part one of the premiere show?  We did and we recapped it here for you!

On tonight’s show the contestants are encouraged to “Get Moving,” and find themselves pushed to new limits when they are introduced to the new outdoor gyms that each trainer has custom designed. The stakes are high, with another red line looming for whoever loses the least amount of weight, and the dreaded “week 2 curse” that has instilled fear in all the contestants. Dr. H visits the ranch, giving the adult players an eye-opening wake-up call about just how unhealthy they really are, and one trainer has a heart-to-heart talk with their team to try and get them on track.

Later, NFL star and San Diego Chargers tight end Antonio Gates cheers on the adult contestants and kids at a football-themed challenge testing the speed, agility and strength of the adults as they compete for a special prize for the child on their team. Plus, the trainers do a special fitness test with the kids and season 10 winner Patrick House makes a special appearance before the dreaded red line at an emotional weigh-in sends another player home.

The Biggest Loser premiere part 2 airs at 8PM on NBC and we will be live blogging it with all the up-to-the-minute details. So make sure to come back to this spot and spend the evening with us! Make sure to refresh often to get the most current details!  While you wait for the recap, meet the contestants for Season 14 HERE!

Tonight’s show starts with a reality check for the teams. Two weeks in a row they are facing the red line. The person landing below the red line goes home and the white team is afraid of losing another member. The trainer’s have moved in their own equipment to create training areas outside for everyone. Bob’s area is loaded with stuff while Jillian’s area is sparse. She strongly believes that the best workout tool is your own body.

The blue team is really worried about the week two curse. Bob sits down and tries to talk everyone into just doing the work and letting him worry about who will leave. Meanwhile Jillian is pushing Dani and Pam, trying to keep them totally unravel. Jillian says she’s being incredibly hard on Dani because she’s trying to tap into the inner fire that will keep her in the competition. She is flat out yelling at both of them. I’m not sure if that’s the best approach.

Jillian tells the white team that she’s trying and mailing to motivate them. She’s afraid that they’ll go home . Pam is afraid that she never falls through with anything. Dani feels pathetic and needs help believing that she’s good enough to even be there. After a long chat the white team comes to the conclusion that Jillian really does care about them and wants top help for real.

The whole crew of contestants is being tested with a football challenge. They are testing speed, agility and other basic drills. After the first quarter the white team is actually in first place with the red team right behind them and blue in last. Agility is the second drill and it’s all about balance. Dani continues to hold onto the lead for the white team. It looks like Jillian really did motivate her crew!

The fourth quarter of competition finds the red team in first place, white team is second and the blue team was last. The white team won $5,000 for Sunny’s school. She is one of the three kids in the competition this season.

The three kids on this season are called to take a fitness test. They will never set foot on a scale, it’s all about getting them healthier. Blingo injured his ankle while playing basketball. The trainer’s are sad to see him hurt but happy to know that he was doing something physical. The one mile run is the most important part of the fitness test because it’ll show how much they need to be trained.

Back to the outdoor gym all of the teams go because now it’s serious business. No one wants to be the one to go home. They are all working so hard and in the last hour of watching it seems that everyones attitude has done a complete turn around.

They are now getting ready for a weigh in and they compare it to preparing for a funeral. The person who has lost the least weight on the lowest team is going home no questions asked. The blue team is up first and David lost 9 pounds in spite of his limitations. Gina continues the trend by losing 7 pounds. Alex has lost 6 pounds and Michael pushed hard enough to lose 14 pounds. Jeff dropped not a single pound. They all say he worked hard and did nothing wrong but he’s afraid he’ll be leaving.

The red team is up next and Cate has lost 5 pounds. Francelina has lost 6 pounds and Jackson has lost only 4 pounds. Joe seems to be the big winner for the red team and has lost 12 pounds. Lisa is the last to weigh in and she needs to have lost 4 pounds for the entire red team to be safe. She lost 5 and they’re all safe.

It’s time for the white team to weigh in and they need 18 pounds to stay safe. Pam is up first and she has lost 8 pounds. Her rough week has paid off. Dani is next to weigh in and has lost 5 pounds. They only need more than 5 pounds for their whole team to stay. Nathan is last to weigh in and either his good friend on the blue team is leaving or he will be. He lost 5 which means Nate is going home which is sad because he really worked so hard. Jillian looks devastated to see him go. Nate left and went home to continue his weight loss. He ended up dropping lots of pounds and asking his girlfriend to marry him.

Tune in next Monday for more of The Biggest Loser!