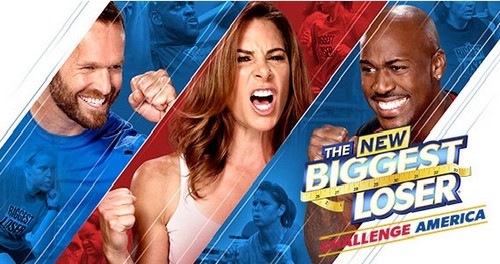 THE BIGGEST LOSER finally returns tonight to NBC for it’s 14th season and it is going to be bigger and better than ever.  It seems like it has been forever since we saw our favorite television show.  Our favorite no-nonsense trainer Jillian Michaels is returning to the gym, and alongside her crew she’s going to make sure these new contestants — including a trio of teenagers hoping to turn their lives around — overcome the hurdles standing in their way.

With the childhood obesity epidemic jeopardizing the health of kids and future generations, “The Biggest Loser” is committed to tackling this critical issue by featuring children this season to serve as ambassadors of change who can inspire kids all over the country to get healthy.

The show’s three kid participants are 13-year-old Noah “Biingo” Gray, who aspires to be a professional baseball player and describes himself as a “skinny kid trying to get out of a fat teenager’s body”; 16-year-old Sanjana “Sunny” Chandrasekar, who juggles Advanced Placement classes and extracurricular activities like singing and tennis, and says that being overweight takes away from her self-confidence and affects every aspect of her life; and 13-year-old Lindsay Bravo, who loved being a cheerleader for two years but gave it up when others started teasing her about her weight, and hopes that by going on the show, she can inspire others to change their lives and get healthy.

Alison Sweeney returns as the host and so do trainers Bob Harper and Dolvett Quince and new mother Jillian Michaels is also back.  On tonight’s show called, “We’re back…and so is Jillian” we will get to meet the new contestants.  The contestants will be separated into three teams.  Each trainer/team will be paired with one child participant who will compete with and contribute to their respective teams.

The two night premiere continues on Monday when NFL star Antonio Gates guest stars and the contestants will be encouraged to get moving.

The Biggest Loser premiere part 1 airs at 9PM on NBC and we will be live blogging it with all the up-to-the-minute details. So make sure to come back to this spot and spend the evening with us!  Make sure to refresh often to get the most current details!  While you wait for the recap, meet the contestants for Season 14 HERE!

Tonight we are kicking off the biggest season yet on The Biggest Loser, the fight against childhood obesity. First, we are introduced to the three children; Sunny, Noah (Bingo) and Lindsay. The three of them are clearly overwhelmed and very thankful to be on the show. The three are going to be ambassadors for change to the country’s youth. Bingo loves playing baseball with his friends, but his weight is holding him back. Lindsay loves gymnastics, but feels that girls laugh at her because of her weight. Sunny thinks school has taken a toll on her weight, she gets stressed out and eats too much unhealthy food. These kids are going to be doing most of their work at home and get this, they cannot be eliminated.

Now it is time for our trainers to enter the stage; Bob Harper who thinks something can be done to help childhood obesity. Dolvett Quince who is challenging children to be a difference maker. Jillian Michaels who now has two kids of her own and appreciates the issue in a whole new way, but she also struggled with childhood obesity, so she can relate to the children.

Bob will be working with Bingo, Dolvett with Lindsay and Jillian with Sunny.

When they walk into the gym for the first time there are inspirational posters of former contestants. Planet Fitness has supplied all the gym equipment and BONUS, every contestant gets a free gym membership.

Jillian tells all the contestants if they touch the treadmill she will add five minutes to their workout, game on! Dolvett is outside with the kids, he starts by playing ball with them and because they are only on the ranch for a week, the trainers are responsible for giving them the tools that they can use at home. The contestants have barely started and we already see some near faint and others puking. People are dropping like flies, the majority of the adults in the gym. Dolvett can’t believe how many people are dropping and he loves it (damn he’s crueler than Jillian). Jillian tells TC to get out of his victim mentality and throws him out of the gym.

The reality of being 440 pounds for TC is really hitting home. Jeff is the second biggest guy and both he and TC have to work really hard to make sure that nobody on their blue team goes home. Nikki suffers with bulimia and diabetes, it is her issue and she wants it to end now. Bob can’t believe how hard Jillian is knocking them out, she tells him that he has three people that cannot even do the basics.

Jillian has put three of her people on notice and tells them they are either going to make a choice to push through it, or go home, she is not going to waste her time on them.

Jillian sits down with the kids and Sunny is really amazed that she could relate to them having been picked on herself as a child.

Everyone is dog tired and Cate finds there is this weird solemn feeling among everyone. Nathan has a breakdown and Cate takes the time to sit with him for five minutes to help motivate him to keep going. Nikki cannot believe how emotional being on the farm is and she is really jarred by it.

It’s time for the first challenge, in a ball pit there are letters to the phrase, “The Biggest Loser”. The children are going to be suspended in the air and they have to guide the grownups on where to find them. The team that wins, will win a five pound advantage at weigh-in. Jillian’s white team wins.

It’s for the children to leave the ranch, they are going home to continue their journey and will be back from time to time to compete in challenges and weigh-ins. Each child is taking home 2 bikes, an IPad to communicate with their trainers and lots of other cool stuff.

Time for the Last Chance Workout and Jackson is digging deep, until he pukes on the side of the rowing machine. Gina tells Bob that she feels she is the weakest link because she is the oldest on the show but Bob tells her to just be confident and she will get through it. Jill is happy, her men did a 2 /12 hour workout and for the first time in their lives they are doing so much for themselves.

Nikki is losing the drive and Pam is worried what is going to happen to her when Jillian singles her out for some one on one. It doesn’t take long for Nikki to break down and she tells Jillian that she doesn’t want to change, it’s more emotional than anyone can ever imagine. Jillian gives her a choice of the door, or a workout. Nikki leaves, for good. Jillian tells her team that she can’t do anything about it because you can’t help someone who doesn’t want to be helped.

Bob tells Jillian that Nikki is going to come back, but Jillian doesn’t believe it, she thinks she is not ready for this. Jillian makes it very clear to her team that she is not going to have the “door” conversation again. Nikki is leaving, she wants to do this with her family instead and visit a therapist to help get her head and her heart right.

Time for weigh-in, this is it, the first weigh-in on campus. Allison tells everyone that there is no yellow line, there is red line and the person with the lowest percentage of weight loss on the losing team is going home, no discussion. Basically, if they didn’t give it their all in the workout, they are done.

The white team have lost the weigh-in, there is a red line and the person with the lowest percentage of weight loss will be going home. The person heading home in week 1 is TC. This is unbelievable, this guy deserves to be there and this is all Nikki’s fault. TC felt really great about himself, like he had a breakthrough and doesn’t think he deserves to go home.

Jillian gives TC a pep talk, then it is hugs for everyone and he is gone home. The good news, we got to see glimpse of TC and he lost another 41 pounds at home on his own.