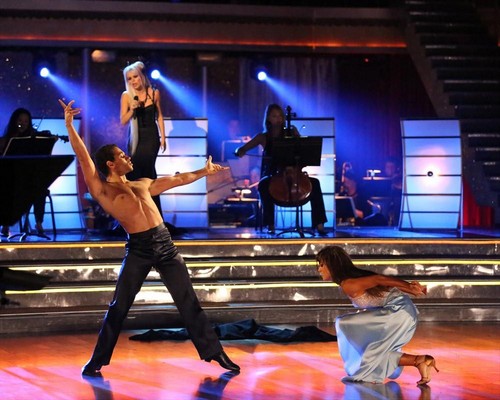 On tonight’s Finale of Dancing With The Stars the couples competed in three rounds of dance.  For the first round Corbin Bleu danced a Quickstep for his “Judges Pick” and repeated a selected routine from earlier in the season.  Check out Corbin’s DWTS bio right here. If you missed tonight’s show you can read a full and detailed recap, right here.

On last week’s show Corbin was given a 40/40 for his Rumba. Carrie Anne said about his performance, “Corbin, your body is a wonderland. I am so glad you took your shirt off. Fantastic rumba!”  If you missed any of last week’s performances, you can check out all the videos, right HERE.

Corbin Bleu and professional dancer Karina Smirnoff: dancing a quickstep. Corbin tweeted this today to all his fans, “Thanks @TheRealJacoby12 I’m working hard to win the #mirrorball for @Karina_Smirnoff because she deserves it! #DWTS vote #TeamCorbin“

Judges Scores:  Len “Last time it was hectic, this time was better but your left arm was flying around a little bit. Although it was an improvement.” Bruno “If you did that on a highway you would get a speeding ticket, you were out of sync. The steps were hard but well done for it.” Carrie Ann “I didn’t see an improvement, it didn’t get tighter, get your mojo back this is the finals.”