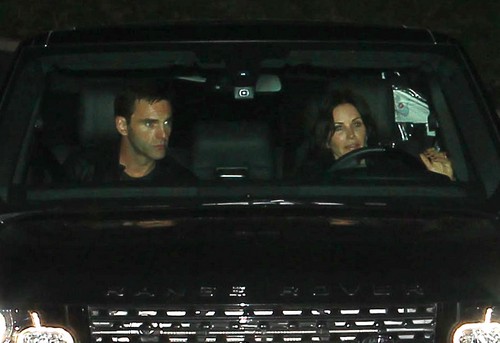 I wouldn’t have pegged Ed Sheeran as one to brag about his new, famous friends in Hollywood, but I guess people can surprise you. In an interview with omg! UK, Ed ended up revealing that he spent Thanksgiving at Jennifer Aniston‘s house, where he also added that he ended up getting way too drunk.

He explains, “We spent Thanksgiving eve at Jennifer’s… I passed out [at her house.] I had drunk a bit too much and needed a time out, so I went down and laid on one of the beds outside by the pool and passed out there. She has this crazy house with a big staircase that goes down to the pool.”

He also added that he was the one who set up Courteney Cox with Johnny McDaid, the singer for Snow Patrol. Obviously, being a musician allows him to have famous musician contacts, and he adds, “I wasn’t allowed to talk about this, actually, but it’s just gone public so… My housemate [McDaid], who I have lived with for a year, I introduced him to Courteney and they started dating — now they’re crazy about each other.”

Well, well. One to brag about his Hollywood friends and also reveal their secrets. I don’t necessarily blame him – anyone would be excited to party with Jennifer and Courteney, especially fans of Friends. But hey, we know for sure now that Courteney and Jennifer aren’t fighting anymore, if they ever were. I think spending Thanksgiving together is pretty definitive in terms of their friendship.

What do you guys think about Ed’s comments? And do you find it odd that he spent Thanksgiving at Jennifer Aniston’s place? I feel like that was probably a very eclectic combination of people. Let us know your thoughts in the comments.