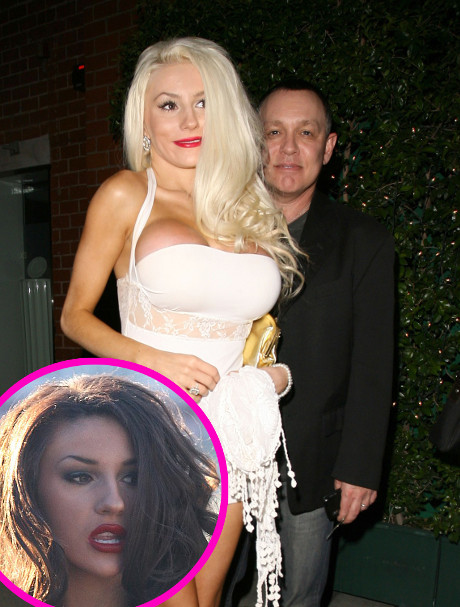 It appears as if Courtney Stodden has decided to give herself a post break up makeover by giving up her platinum locks and switching to brunette. We’ve seen Courtney toy with her hair before by trying different wigs, but now it seems as if she’s made the change permanent, perhaps a move to help her ring in the New Year. Courtney’s stunning brown hair comes just a month after her split from Doug Hutchison, who’s 53 years old.

Courtney was spotted at Ralph’s supermarket in WeHo on Thursday and let’s just say she wasn’t saddened by the fact that she was photographed with her new do. She wore a red top with some tight black pants — just the perfect outfit for a day at the supermarket — and had enough red lipstick on to stop traffic.

The change seems to have arrived within the past few days, as Courtney was spotted at a beach in Ventura not long ago flaunting her original Courtney color. It’s quite apparent that Courtney was happy with her new style because she was running her fingers through her hair as she walked up and down the aisles. When it came time to put the groceries away in her Mercedes Benz, she struck a Stodden pose. Because she wants to be super famous really, really, really bad.

What do you think of Stodden’s new hair? Do you think it’s a welcome change and she made the right choice? Think she’ll maintain this darkness for the long run . . . . or will she be running back to her Classic Courtney Platinum before the month’s end?