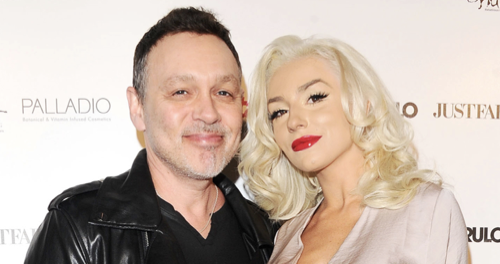 A-ha! We told you this was coming! As soon as Courtney Stodden wrapped up filming Big Brother UK and her husband Doug Hutchinson showed up in London to drag her home it was pretty clear there was a serious problem. Perhaps it was Courtney’s partying on as her clothes fell off as the flashbulbs snapped, but something made Doug realize wifey wasn’t being too loyal. Last we saw them together they were walking through the airport not looking nearly as connected as usual. Typically Doug would have his hands creepily on Courtney, helping her to balance in those stripper shoes. This time out he looked pissed and she was teetering on her own.

Now according to Radar Online, the couple has indeed separated. After Courtney got a taste of real freedom in London she realized that her old man, hubby is just dead weight and maybe even a bit creepy. She is only 19 and wants to party and have a good time. She’s also rumored to be pitching a reality show that will focus on her search for her next sugar daddy – er, boyfriend.

How is Doug holding up? Well after years of being looked at as a dirty old man for marrying Courtney when she was just 16, he is said to be absolutely heartbroken. His whole life has been wrapped up in his child bride and he has no clue what to do without her. Do you think Courtney is creeped out by her husband? We’ve seen him get aggressive with her, do you think as this marriage publicly unravels Courtney will start dishing all of the details of an abusive relationship with an older guy that tried to control her? Tell us your thoughts in the comments below!