Courtney Stodden & Doug Hutchison Should Get Reality Show — They’ll Live Together in Same House After Divorce! 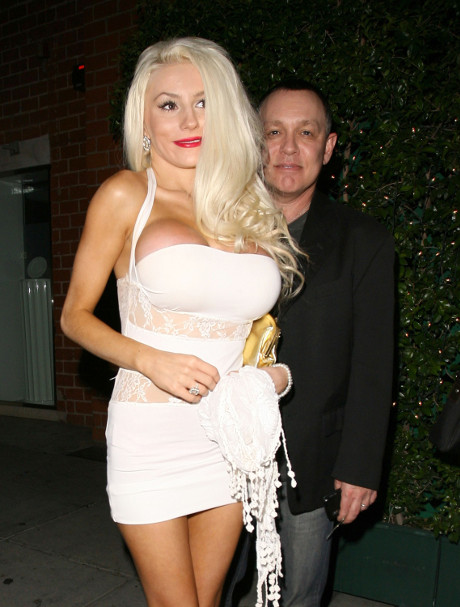 While the rest of the world is waiting eagerly for the Kardashian Kristmas special that was scripted and filmed in September, I am wondering what’s new in the lives of Courtney Stodden and Doug Hutchison.

How, exactly, is that a separation? Maybe they don’t own a dictionary and would enjoy the donation of one? They would only need a single copy since they are still living in the same house.

Perhaps they are living together out of necessity. Let’s face it, when Doug was in his early 50s and married this girl when she was 16, the few acting leads he had disappeared entirely. He lost everything, including his own family, who disowned him, for Courtney. The entire matter is hypocrisy considering what we’ve learned from Corey Feldman and how pedophiles are everywhere in Hollywood, and Ms. Stodden had her parents’ blessing for the marriage.

Speaking of Courtney, what talents does she really have other than teetering almost naked in stripper heels while Doug helps keep her from falling? And at this point, who, other than a reality show producer, is going to hire her for anything? It’s a shame the Love Boat isn’t on anymore. Do you remember all the ‘famous for being famous’ people who graced that show? Courtney could be a regular! Every week she could fall in love with someone new, but I digress. The point is, she doesn’t really have any marketable skills that anyone can see without a microscope, so that leaves little income potential outside stripping, porn, and ‘reality’ television.

She happens to have a reality show in the works in which one of her Celebrity Big Brother housemates, Lauren Harries (who is supposed to be 35 but looks like a 61 year old Phyllis Diller), will live with Stodden and Hutchison. So one could assume, due to contractual obligations and earning potential, Doug and Courtney have to remain in the same house, at least for a little while. Once that show wraps, however, it’s anyone’s guess as to whether or not the May-December couple will remain housemates or how they will make a living.

Who knows? Maybe the Stodden-Hutchison Divorce could be its own reality show? It isn’t every day a famous couple splits and allows cameras to film their every waking moment. Who wouldn’t love to tune in and watch as Courtney and Doug fight over who didn’t clean the cat box, or whose turn it is to pay the electric bill, or who keeps using all the toilet paper and not installing a new roll? Sounds electrifying, doesn’t it? Gosh, the possibilities for a reality show about a separated couple living in the same house are endless! And just think of all the laughs! Comedic gold, people! It could be better than any sitcom because the hijinks would be REAL!

Would you watch Dourtney Abbey? Of course you would.

Would you be able to separate from your loved one and share the same house with them? Please share in the comments below!