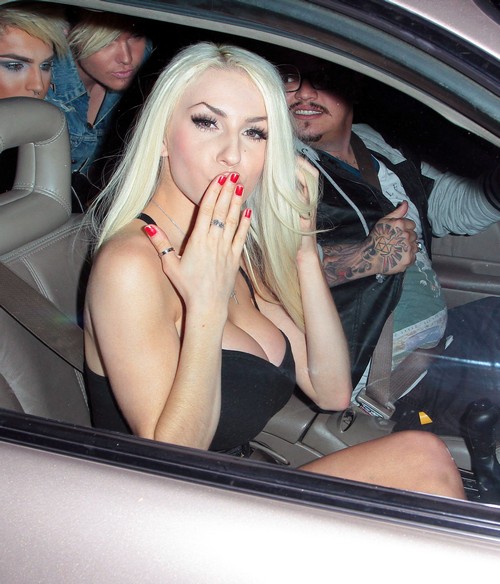 Is Courtney Stodden the next Lady Gaga? Yes, stop laughing. But seriously, who would have thought Lady Gaga would become what she has? Just because Courtney’s been the victim of some twisted relationship issues due to her sick parents and her even sicker soon-to-be ex-husband doesn’t mean her career should rot. Her talent has always been overshadowed by her personal life, but that might be about to change.

According to reports, the producer who turned Lady Gaga into THE Lady Gaga is about to work his magic on Courtney Stodden. Rob Fusari told Celebuzz, “I’m feeling what’s going on with Courtney. I think it comes off real in a quirky way. I think she’s going for it and I’m into that 100 percent. Of course, I would get in the studio with her and vibe to see if there is any type of creative marriage.”

Gaga and Fusari had a strong working relationship until a couple of years ago, when Fusari filed a lawsuit against Gaga for not giving him credit for coming up with her stage name and co-writing some of her songs. Gaga then counter sued him, and the whole thing became a big mess until they both dropped the lawsuits in 2010.

Now, Fusari remains full of praise for Gaga, and says he’s ‘digging’ her new material. And Courtney, of course, finds the Gaga comparisons endlessly flattering, saying, “I love Lady Gaga. I’m a complete Monster! Her success is amazing and it’s well deserved. I’d be completely humbled and honored to work with the man who’s behind Gaga’s success. Pokerface and Paparazzi are two of my fave songs of all time.”

Despite the inherent humor in this story, you never count out the underdogs. Courtney’s talent may finally get a chance to speak for itself, and we’ll see if she really has a chance of being crowned the next Gaga or if it’s all just smoke and mirrors.