BY Kristine Francis on October 17, 2013 | Comments: one comment
Related : Uncategorized 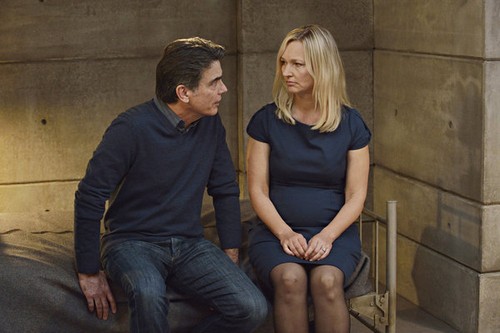 COVERT AFFAIRS continues tonight with its Fall Premiere on the USA Network with a new episode called, “Dead.” On tonight’s episode everyone manages the fallout from Annie’s “death”. Did you watch last week’s episode before the hiatus? We have a full and detailed recap here for your enjoyment.

On the last episode before the one month hiatus with only Auggie as a resource and dangerous assailants in pursuit, Annie headed to Frankfurt and made a last ditch effort to take down Henry. Calder and Annie finally face off to a tragic end.

On tonight’s show Annie begins her first deep cover operation completely on her own. Meanwhile, Auggie, Joan (Kari Matchett), Arthur and the rest of the CIA manage the fallout from Annie’s “death” at Calder’s hands.

Tonight’s season 4 Fall premiere looks like it is going to be great and you won’t want to miss it, so be sure to tune in for our live coverage of USA Network’s “Covert Affairs” at 9:00 PM EST! While you wait for our recap hit the comments and let us know how excited you are for the season 4 Fall Premiere of Covert Affairs tonight.

As her former world mourns Annie’s death, the alive and kicking Annie changes her look and goes hunting for Henry Wilcox’s former wife. She’s tracking her in Switzerland while back home Auggie had friends clear out her desk and Calder officially listed her as deceased.

At first it’s canvassing. She follows the ex-Mrs. Wilcox around. Finds out where she lives and whose she’s been seeing. Once that’s done, she gets a place of her own. Somewhere hidden and where no one will ask too many questions. After she gets settled in, she makes contact. She joins Sayna’s bereavement group claiming she lost a brother.

Joan is allowed back at the agency but with lower clearance than before. Her health has improved enough that she can go back to work. Arthur doesn’t want her to. He knows on one level it’s a good strategy but he wants to put his family first. They never did that before and yet he wants to start now.

Calder has to deal with being known as Annie’s killer. He told his office they couldn’t wear commiserating ribbons and spots them anyway. He gets congratulated by his boss and then receives secret information that the agency will be watching the agents now more closely. Spying on their own is more important than ever. However the investigation can or in Henry’s case will start with Calder. Henry is suspicious that Annie never had any final words.

Auggie got called in for questioning. He doesn’t reveal important info. Only anger that Annie is dead. He especially expresses that anger towards Calder. Later both men congratulate themselves on their acting skills. Auggie knows Annie is alive and the only thing upsetting him is that Calder never created a way to contact her. Annie didn’t want him to. Calder is simply hoping that Annie can get some kind of intel out of Sayna.

Which is becoming difficult with Annie keeping up the dead brother pretense. It’s been three weeks during this group therapy and she has yet to diverge anything about herself. If she doesn’t begin talking then Sayna will begin to get suspicious. The story she comes up with is that close to Sayna’s. When she reveals this story, she got Sayna to open up to her. Then she ruins it by being blunt with questions about Henry. She manages to evade for now but how much longer can she keep it up?

Annie gets a job with Sayna’s fiancée. Sayna helped her get through the door and in her minute of an interview she impressed her new boss. Her new position allows her to check Sayna’s private emails. While the job provides her great access it also provides risk. One of the firm’s clients happens to be Henry’s minion. He probably sent this guy to spy on his ex. Unfortunately both Annie and the assassin recognize each other so only one of them is going to live at the end of the business day.

Annie apprehends “Mr. Goodman” during his presentation break. As she’s sneaking his body into the back of the car, Sayna holds her up at gun point. She tells Sayna to come along. Her plan to convert Sayna against Henry is proving easier than she thought. Sayna knew Annie was a plant but she thought Anniw was working for Henry.

Henry wanted a second chance with her and she had turned him down. She figured when Annie arrived that she was sent to watch her. Both women lost someone because of him and that’s makes them friends in a way. Real friends this time.

Sayna leaves Annie alone with Henry’s man. She doesn’t need to know what comes next.

Calder and Auggie found a way to manipulate Henry. Turn him against his own people. Slowly begin to weave doubt and let Henry bring himself down.

As Annie began to torture the operative, she got little answers. Sayna couldn’t take it anymore. She needed to know Henry’s plan for her fiancée and she tried to get it out of him. All she did was allow him to escape his straps leaving Annie no choice but to kill him. They clean up the scene and burn any evidence left over.