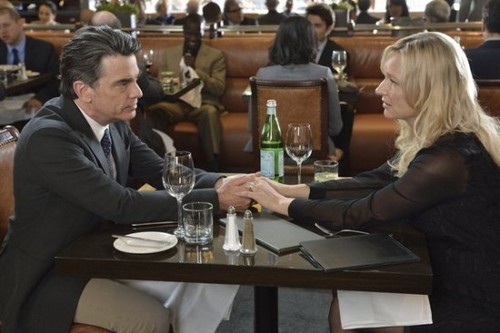 COVERT AFFAIRS continues tonight on the USA Network with a new episode called, “Here Comes Your Man.” On tonight’s episode Joan and Arthur determine that now is the time to bring in reinforcements. Did you watch last week’s episode? We have a full and detailed review here for your enjoyment.

On last week’s show as Annie (Piper Perabo) and Auggie’s (Christopher Gorham) romance heats up, both begin to notice how it strains their working relationship within the CIA.  Arthur (Peter Gallagher) and Henry (guest star Gregory Itzin) almost come to blows.

On tonight’s show with a new glamorous NOC in place, Annie is sent on an undercover op to Vienna, forcing her to cut off all communication with Auggie. Joan and Arthur determine that now is the time to bring in reinforcements.  Tonight’s episode guest stars Manolo Cardona, Gregory Itzin, Simon Kassinades and Michelle Ryan.

In a flashback of the future it’s revealed that Annie is shot and killed by Calder. He makes his report to Henry Wilcox.

Back to the present, Auggie thinks he found Henry’s spy. He believes its Calder and tells Annie so. When the two head in to the office they notice the massive redecoration. Calder wants to re-establish a stronger work force with less focus on comfortable. He wants to do these things completely different.

Beginning with Annie’s assignment. He is going to be her handler. It’s nothing personal against Auggie but he’s not going to allow their obvious romance to jeopardize her mission. To make sure of that he bans the two from talking while she’s on her mission. Annie is willing to play along but Auggie suspects something. How could he not with Henry’s man in charge of Annie’s safety. He wants her to look out for any traps. He wouldn’t be surprise if there was one.

Once Annie does make it to Vienna it sure looks like she’s been set up to fail. She just got in and yet she’s expected to meet with her target within the next couple of hours. She’s only had the case for a day. Why push her so soon?

August may not be allowed to talk to Annie but that doesn’t mean he’s not going to help. He goes to a very special friend of his. One willing to trade information for some booze. He tells Auggie about Annie’s guy. The one she was abruptly forced into meeting. The man name is Stavros and he used to be a C.I.A asset back during Henry’s days.

Auggie calls and tries to warn her however she chose to continue with her meeting. And despite trying to hide it, Calder knows Auggie called her. He wasn’t lying when he said no contact between the two. He had pulled Annie’s call logs.

Stavros proves to be a charmer. He certainly tries to get Annie to stay in Vienna for him. She turns down the offer though explain that she’s really only in town for business. What he doesn’t know is that her business involves leaving a Faberge egg on his seat and scaring the life out of him.

When he asks she denies being part of any known organization instead she’s in the import/export business. She sets her price and organizes a meeting. He ends up setting a trap. Stavros almost robs and kills her before she can get him to renegotiate. Her original cover proved to be too weak for such short con but as an arms dealer she’s safe.

Auggie and Annie remain in contact. Auggie wanted to fill her in on Calder pretending to be informative than he is. Essentially, Annnie’s mission is the blind leading the blind. No pun intended. Auggie tries to get on Annie’s case to only get shut down. Calder is risking two operatives but he still has dirt on Auggie and he’s not afraid to use it.

Annie gets attacked in broad daylight by Stavros’s man of action. Luckily her rescuer came at the perfect time. He was sent by Auggie. He sent in Teo. He knew Teo would help her escape out of any traps Henry set. What Auggie hadn’t suspected was that Teo would kill Stavros the moment he got his chance.

Too be fair Teo did warn her he was on a different mission. Annie wanted to find dirt on Henry and for some unknown reason Teo made sure she never did. The saving grace was that Annie did pull info off of Stavros’s phone before she gave the phone to Calder.

She doesn’t truly believe the whole mission was a trap but Stavros claimed to have 25 missile heads and Interpol only collected 20. It’s probably best not to ask around what with Calder being suspicious over how exactly Annie survived.

She’s winding down with Auggie at the apartment when she gets a message from Henry. He wanted to tell her that Seth is dead in person. Seth is the guy that died because of Annie. If they pin his murder on her then it’s all over.