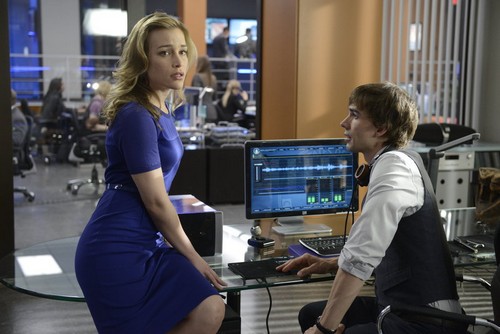 COVERT AFFAIRS continues tonight on the USA Network with a new episode called, “Rock a My Soul.” On tonight’s episode Arthur and Henry almost come to blows. Did you watch last week’s episode? We have a full and detailed review here for your enjoyment.

On last week’s show Annie returned to Colombia and had to determine Teo Braga’s true allegiances in order to thwart a potential act of terrorism. Joan began a round of interviews that could have significantly altered her career trajectory within the CIA.

On tonight’s show As Annie (Piper Perabo) and Auggie’s (Christopher Gorham) romance heats up, both begin to notice how it strains their working relationship within the CIA.  Arthur (Peter Gallagher) and Henry (guest star Gregory Itzin) almost come to blows.

The show begins with Annie and Auggie doing some physical training. Auggies questions how she will deal with Henry once he finds out she let Teo go. They come up with a cover story Henry will believe. Annie thinks it was worth letting Teo to get the information on Wendy and Shoo Chin the two Chinese nationals who funded the soul star bombing. Annie does some research and follows both of the Chin’s to learn more information. They are each power players in D.C.

While following Wendy Annie learns the Chin’s contact has called a meeting. She thinks she needs to get closer to them. Agguie asks her how she got the intel from Teo about the Chin’s. She explains what happened but the two still disagree about trusting Teo.

Joan calls a meeting to name a Auggie the new Interim Head of the DPD. Annie is surprised he didn’t tell her about the promotion. It brings up the conversation about work and their relationship.

Annie moves into an apartment next to the Chin’s and they set up intel to watch the couple’s car too. Annie sets it up so she runs into the Chin’s checking the mail and introduces herself to them. Wendy is cold towards her but the meeting gives her good read on the couple.

Joan settles in to her new job with a full schedule. Eric ambushes her for a chat as he questions her making Auggie the interim head. It did not follow protocol. Their talk is interrupted when Joan is notified that Arthur is in her office. He tells her that the baby has changed everything for him. Joan admits they have the same goals but she is not ready for everything yet.

Annie relays her meet with the Chin’s to Auggie. He tells her Wendy was in Columbia a few days ago and it was her third trip. She was meeting with the ALC banker who was killed. Soon Shoo’s cell gets a call for a meeting. Annie follows them and gets close to hear their conversation. Their contact is Henry and he upset about a transaction not happening. Shoo ensures him that the money was transferred but they don’t know who stopped the bomb. Henry wants to end their contract in exchange for giving them money to start over. He tells them he will be in touch with the details.

After sharing what she heard with Joan and Auggie Annie reveals she wants to try and turn Wendy before Henry has them shipped off. Although Auggie is reluctant at first he agrees but only if Annie moves slowly and for now she only continues to follow them. Joan questions Auggie changing the rules on Annie now that is job has changed. Annie gets a note from Henry to meet him at the Lincoln Memorial but she doesn’t tell anyone. They meet and he asks about her trip. She calls it successful and then relays how she had him but let him go so he would have lead him to the terrorist. The conversation turns to Auggie and Arthur being corrupt and Henry shares with Annie about a gap in Auggie’s career in 2006.

When Annie sees Auggie she questions him about Henry’s accusation. He won’t divulge anything and gets agitated. Annie keeps pushing and uses their relationship. She tells him they have to put their relationship first or they will end up like Joan and Arthur.

Late she listens and Wendy talks to someone in Chinese then goes to her house claiming to have an emergency. Once inside her apartment Annie tells her she can help her but Wendy won’t listen and runs away from her fearful for her and her husband.

Although Wendy run’s from her Annie is able to get her hands on Wendy’s sim card and gain access to her contacts. Eric is less than thrilled to learn Auggie approved the survailence of Chin’s after Wendy filed report against Annie. Auggie arrives as Eric is lashing out at Annie and puts Eric in his place. Then he takes Annie aside and rides her for not telling him she was going to attempt to talk to Wendy. Things are tense as they try to deal with him being her boss.

Auggie texts Teo on the burner text Annie gave him. The two meet and Teo tries to get it across they want the same thing. Auggie tells him he is not calling the shots. He then tells Teo to talk to Arthur because he is concerned about him. Auggie wants to know what it is like to not have feelings anymore Teo tells him he hopes he never finds out.

Thanks to the sim card Wendy’s phone Annie is able to find the Chin’s at Union Station. She leaves to go find them without getting Auggie’s permission. There she spies Henry and heads to find the Chin’s. Annie finds the couple and convinces them to let her help them. She asks for the proof for Henry and learns they mailed it to Miami. She tells Barber to have a car waiting for her. As they are leaving Henry sees them.

Annie and Joan talk about having Henry thanks to Wendy’s spreadsheets of her insurance policy. Joan then changes the topic and tells her that Auggie being her boss is going to be challenging for the couple. She goes on to tell her she has been there then tells Annie there is no room for secrets.

When Auggie sees Annie again they agree to a no more secrets policy. He reveals to Annie that he knows Teo because Arthur hired him to train Teo for an off the missions books, kill the man who killed Teo’s mother. There was more he had a female operative with him and they fell in love in the field. He shares that Teo supplied them with bad intel and it got Helen killed right before his eyes. That is why Auggie can’t put his faith in Teo. Annie informs him he will never loose her by telling the truth.

The next day Henry finds Arthur having breakfast. Arthur tells Henry he belongs in prison. Henry lets Arthur know that there is nothing worse then losing the child. The two men trade jabs but before Henry leaves he alludes to threatening Arthur’s children. Annie goes to the safe house where the Chin’s are only to find them shot dead. She later learns that the Chin’s package in Miami was intercepted when the mailman was killed.

Joan asks Arthur to come back home. Auggie loses his position as interim head because he did not listen to Eric’s advice to stop following the Chin’s and now they are dead. It was all Henry. Auggie’s replacement turns out to be Calder.