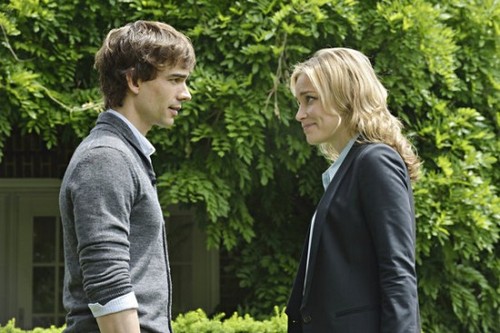 COVERT AFFAIRS continues tonight on the USA Network with a new episode called, “Space (I Believe In)” On tonight’s episode Calder grows even more suspicious of Annie Walker. Did you watch last week’s episode? We have a full and detailed review here for your enjoyment.

On tonight’s show Annie meets her match in a seasoned operative who teams up with her to halt the illegal sale of deadly weapons. Auggie is forced to tackle his own past demons. Calder grows even more suspicious of Annie Walker.

It looks like Auggie’s ex-wife, the dead one, is actually alive. Annie tried to see if Auggie was lying about Helen’s death. Henry had gotten in her head when he swore Helen was alive. However Annie is willing to trust Auggie. But just to be safe she asked to see an old picture of Helen. Annie realizes Henry told some of the truth. Helen is alive but it was only Arthur who knew the truth. Helen goes by Teresa now. She acts as a go between for Arthur and Teo.

Auggie and Annie go together to talk to Arthur but the first thing that Auggie does is punches him. He really did love Helen and to find out it her idea to stage her death is a massive blow. Apparently she went ghost in order to infiltrate groups without repercussions. And seeing as everyone is now up to date Arthur believes it’s the perfect time team up Annie and Helen for a joint mission.

Auggie returned to his apartment alone to find Helen there waiting. She figured they should talk. She must have heard of the scene he created because she makes herself pretty clear when she says it was easy to “go dark”. Their “marriage” was arranged for their job. His feelings were real but hers wasn’t. That hurts.

Helen first official meeting with Annie doesn’t set off fireworks either. Annie knows she broke Auggie’s heart and Helen, in her detached and cold way, finds Annie to be too emotional. Yet both women need to put aside their assessment in order to work together. Their mission is to get a few missiles back. As if that were easy.

Annie approaches the guy who stole offering to make a deal and Helen goes in to apply pressure from his bosses the moment he hesitates with Annie. The plan works but as Helen was leaving the building Henry caught sight of her. It wasn’t much although Henry never needs much. He will look into the woman just to see if his eyes played tricks on him.

Back in the states, Calder has been digging through Annie’s story of when she was in Vienna when he finds a discrepancy. She said she shot the two threats with their own gun. Yet Calder’s call to Vienna said the assailants were shot with an issued gun. Calder now suspects someone else of being in the room and he decides to check the security cameras.

In the meantime Auggie called in a few other analysts to help break open the secrets of the USB. He’s a bit touchy from the whole Helen mess still and he nearly bites their heads off. Nevertheless these guys are his friends. They try to point to where he is willing to talk about. Like maybe Annie. Langley has been a hotbed of rumors over the couple. Some say they’re together, others don’t. His friend for one thinks Auggie’s is a lucky guy. First he got to be Annie’s handler and now they’re dating.

That got Auggie thinking. He was lucky to be her handler. Too lucky. He goes to Joan and asks why she chose to pair the two of them. He suspects Annie was his consolation for Helen. The truth is he was the only one available at the time.
He does at least finally breaks into the Flash Drive. It has proof of Henry working with a terrorist group. He does the honorable thing by giving the intel to Arthur but he lets his close friend know that their relationship can never go back. Auggie can’t trust him anymore.

Helen tried to stop Annie from going through with their plan. She feels it’s not safe with Henry in town. Especially as he came early. Annie, stubborn Annie continues anyway only for Helen to be right. It was a trap. The thief tried to kill her. The only reason she’s still alive is because Helen arrived in time to save her. That’s been happening to Annie a lot lately. Someone having to save her.

The difference this time is that it might be an apology. Helen didn’t think of much with Annie. Not that it was Annie’s fault. Helene had lied earlier to Auggie. She did love him. She only left so that she wouldn’t risk his life. So seeing Auggie date another agent couldn’t have been easy.

Hearing the real reason why Helen left has served to make Annie anxious. She was worried before about all the secrets and lies there is between her and Auggie and at present she’s worried if they can make it with both of them being on the job.

They don’t make it. Annie goes to Auggie the first chance she got and yet all they do is talk about the pitfalls. Neither of them fights to hold onto each other. This is the culmination of 4 seasons waiting for them to be together and they don’t even last eight episodes. Can they reunite next week?