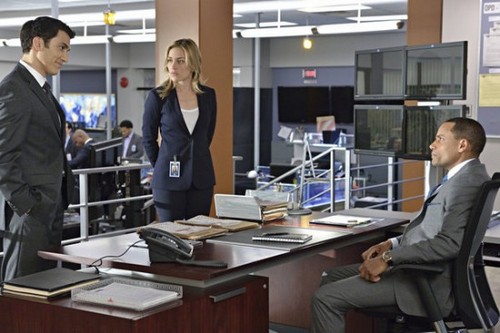 COVERT AFFAIRS continues tonight on the USA Network with a new episode called, “Space (I Believe In)” On tonight’s episode Henry presents Annie with a major opportunity. Did you watch last week’s episode? We have a full and detailed review here for your enjoyment.

On last week’s show with a new glamorous NOC in place, Annie was sent on an undercover op to Vienna, forcing her to cut off all communication with Auggie. Joan and Arthur determine that now is the time to bring in reinforcements.  Last week’s episode guest starred Manolo Cardona, Gregory Itzin, Simon Kassinades and Michelle Ryan.

Night time meeting are always mysterious and sometimes they’re very dangerous. Annie, Auggie, and Joan are trying to figure out a way to take Henry Wilcox. Not an easy feat. Yet Annie volunteers to get what they need personally.

She goes to Vincent her friend/foe at the FBI headquarters. Vincent doesn’t trust her but to find out who killed a federal agent he’s willing to work with her. Although he won’t let Annie of the hook if he ever finds out her involvement. In the meantime he shows her what they have. This just happens to be DNA found under the victim’s finger nails. It’s only a matter of time before they make connection to who he was with and the possible murderer.

She freaks out and calls Auggie. He reassures her that the lab work will take weeks. She needs to calm down and focus on the plan. She had to stay by Vincent’s side as he investigates. That means going back to the scene of the crime. It’s harder than she thought. She can’t help remembering what happened that night she killed Sam.

After finding nothing but disappointment, Vincent asks his people to fast track the lab results. His disappointment was finding Sam’s safe empty. Annie knows it wasn’t her people but it could have been Henry. Auggie is helping delay the results but Annie is so close to her breaking point. And then Henry calls her in for a secret meeting.

He asked her to meet at his newest endeavor. A agency for super spies. His super spies. He wants to hire Annie on to his elite group. Before she can make up her mind he pays her for all the work she’s already done. Moments after giving her the check he talks to her about Sam. He wants something. She shouldn’t be surprised the check still carried strings.

Henry wants Sam’s hard drive. The one the Feds got lucky finding. In exchange he’s willing to help her with the investigation into Sam’s death. She doesn’t need any help with finding the killer.

Annie tried to sneak evidence out of lock up but Vincent caught her. She tried to talk her way out of it although he says if the C.IA. wants the evidence they have to go through the proper channels. He gives the flash drive to her superior Calder and while he’s there he might as well ask Joan about her relationship to Sam. She revealed she was in Narcotics Anonymous with Sam. Something Calder believes he should have known from the start.

Annie’s plan did work. She was able to switch flash drives. Auggie is doing his best to decrypt the files still the process is very slow. Too slow to take Henry down with Annie by the time the DNA comes back. The next move has to establish suspicion on Henry. Using Henry’s and Sam’s GPS system she does her best to link the two meeting each other before handing it over to Vincent as a possible lead.

She then calls Henry to warn him that he could be considered a suspect. What she doesn’t expect is for him to her that her secret is safe. What does he know? & how much?

When Henry goes in for questioning at the FBI headquarters he pretends to have only been an acquaintance of Annie. Vincent begin interrogating him but the whole meeting is about to end too soon for Auggie to manipulate Henry’s GPS records. Annie stalls long enough for her plan to work but Vincent now knows Annie was jerking his chain with Henry.

He could have delved in further but they got word someone had used Sam’s credit card to buy pizza. They chase down the lead. Literally! Vincent tries to tackle the guy and they end up going through the balcony off of the third story. Vincent is okay; their suspect not so much. In the end, Vincent feels as if this whole thing was a set-up. Why else did their supposed culprit wait three weeks before using the credit cards?

Vincent goes through Henry’s phone records again. He found another familiar phone number. Annie’s! He goes to confront Henry alone and Henry decides to fill Vincent in on some of the things he’s been missing.

Annie could have caught his threats in time if she wasn’t freaking out about what Auggie told her. He couldn’t break into the FBI’s records. The DNA test are going to point to her. She can’t harp on herself. Not wen they have Henry’s movements down to a Tee. One of the spots Henry kept visiting every week was where he used to take his son camping. Apparently he’s still grieving.

Auggie doesn’t want Annie to feel bad for Henry and she isn’t. She just knows that for Henry because of what happened to his son he’s never going to stop with revenge.
Annie finally stops hiding from Vincent and goes in to see him. But his news is surprising. The DNA matched the drug dealer that died recently. Vincent tells her that it matched up the way she said it would. She must have friends in high places. Vincent knows the truth.

Henry had turned Vincent. He did it so that Annie could see what he was capable of. He asks her to work for him for the last time and she says no. He loses his temper and so does Annie. She tells him she has the flash drive.

Before she leaves Henry tells her something about Auggie. The one thing that could hurt him. Helen may not be dead.