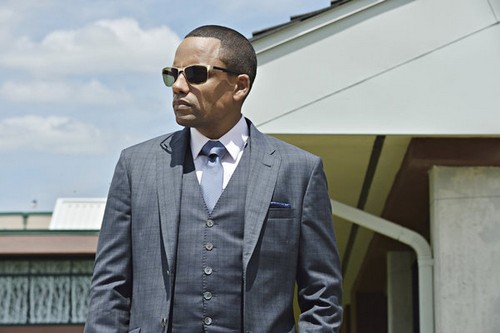 COVERT AFFAIRS continues tonight on the USA Network with a new episode called, “I’ve Been Waiting for You” On tonight’s episode Auggie lands in hot water. Did you watch last week’s episode? We have a full and detailed review here for your enjoyment.

On last week’s show Annie met her match in a seasoned operative who teamed up with her to halt the illegal sale of deadly weapons. Auggie was forced to tackle his own past demons. Calder grew even more suspicious of Annie Walker.

On tonight’s show Annie convinces Teo to turn on one of his own in the hopes of bringing Henry down. After Joan makes a stunning decision, Calder begins to show his true colors. Auggie lands in hot water.

Annie is arriving home and walking through the apartment with boxes everywhere. She is hesitating to call “Mingus” on her phone. There is a knock on the door and Auggie asks to come in. He’s talking about a new mission for her. She is questioning whether or not he still wants to work together because she’s worried that things will be different. He says thins ill only be different if they make them so. He pulls up the SSO on his laptop and she sees that he’s linked into Project Hummingbird. ‘She makes an awkward moment with her hand on his arm congratulating his accomplishment. He pulls up a picture of their current target and she is hesitant to say yes but eventually does. She is attempting to track the man from his computer while he is guiding her along. They are checking the camera recording locations in the building. Auggie finds him in the cameras in the tunnels. She finds the entrance to the tunnels as Auggie directs her further inward. She continues to follow the tunnel until she comes upon a crawlspace. She follows it out and heads him off as she tells him that they need to talk.

They are talking about his “curse” in regards to her team and that Eduardo won’t talk to them but that he may talk to him. She explains that Arthur wants to see him because he wants to save him. Joan and Calder are talking about Annie’s previous Columbia mission. Calder inquires about opening an investigation against her as Joan thanks him for bringing this to her attention and that she’ll take care of it. Calder is worried about her getting rid of the evidence and that he wants to speak to a comrade of Eduardo’s about Annie’s questionable activity. Joan says that she will transfer Annie out of his department so he longer has to worry himself about it. He walks out with a sour look on his face. Annie and Tao meet with Arthur. Arthur says he’s been worried about him as Tao begins to criticize him. Tao tells him that he’s the worst mistake that his mother ever made and Arthur tells him what happened after she died and that he wanted to get him into his custody. Tao tells him he wants him out of his life as Arthur says no, but that he wants everything to be different but that it’s too late because he is a spy and he has a mission.  Arthur thanks Annie and wishes her luck on her assignment.

Tao and Annie are staking out in a hotel room. Tao is nervous about their location as she assures him that it is a safe location. Tao tells her that he still doesn’t want to talk about his father. They talking about the distance that is created between people while being a spy and how it negatively effects how you grow and the distance it creates with a family. The people he trained with he hated at first but describes how they became brothers and he wishes he could save them all but that this is what he was trained for and there’s nothing that can change that. Annie is about to punch him in the jaw to make the bruise look real as Joan shows up. She introduces herself to Tao as he says he knows who she is. Joan takes Annie outside to talk as she thanks Tao for all his work and the wishes he could’ve worked with her. He says he didn’t get to decide those terms. She tells him that he did everything he could to protect Tao. She also says that when they get back from this assignment that he may choose whatever project he wants to work on and he shows his gratitude. Joan walks outside to talk to Annie about what happened with Calder and that she is transferred under Joan’s direct command until they decide where she will be assigned. She hits him once in the mouth and he says she can do better than that and he needs a black eye. She hits him again and he is satisfied with it. Calder is in his office attempting to look into Eduardo’s FBI file but he is denied access. He calls Martina telling her that he’s trying to find out where Eduardo is being held but she tells him that he is not in Columbia at least and that she’ll ask around.Annie is driving down a dirt road and onto a farm. Tao leans up from the back seat as they get out of the car.  Annie takes the armored truck and Tao walks inside the farm through a door with an “OFFICE” sign on it. She drives up to the compound where Eduardo is being held and she passes off the paperwork required to move him out of there. She’s says she’s moving him to Indiana after providing her credentials and she is let through the gate. Eduardo is brought out in bonds, put in the back of the truck and she drives off as a helicopter is landing. Calder steps out and she turns her head away.

Calder steps away from the helicopter and tells the men there that he needs to speak to the administrator of the cell block immediately. Annie is held up by a man needing to double check the detainees transfer records. He walks back out and clears her and she drives off; nervous and trying to avoid her face being seen by Calder. Calder is speaking with the administrator and she tells him that he just missed Eduardo being transferred out. Annie pulls back onto the farm where Tao was waiting and locks him in the truck with Eduardo. Eduardo asks him what has happened and he says that he is a prisoner of the CIA as Eduardo interjects that they are prisoners of war. Tao is trying to find out who he worked with and what his plan was. Eduardo reveals that the plan was to destroy the U.S. Embassy in Bogota. Eduardo tells him further that the man he was working with was supplying them with the materials required for many terrorist acts.

Annie is being chased by a large black SUV that is trying to run her off the road. The trucks is knocked onto it’s side an slides into the woods. She regains consciousness, pulls her gun out and clears outside the truck. She goes to the back to pull Teo and Eduardo out of the truck. She unlocks Tao’s restraints and tells him to unlock Eduardo as she covers them. The man from the SUV is attempting to aim for the gas tank. He is having too much trouble with the restraints and they both run away from the truck as the gunman hits the gas tank and the truck explodes with Eduardo still inside. The gunman gets back into the SUV and drives off. Tao wants to go off on his own as Annie is saying that is he does that, he will never be able to come back. Tao says the he can’t stop his information hunt and to tell Arthur that he is sorry. Calder arrives on the scene of the destroyed truck as Annie runs the opposite way off Tao.

Annie reports in to Joan to tell her what transpired and they need to get to Henry before Teo does as she requests extraction. Annie arrives at her apartment to find the door handle and bolt knocked out. She draws her weapon and moves inside to see that place empty and what is left in a mess. She finds a rectangular hole in the wall and leaves in a hurry. She arrives Augie’s and tells him that he needs to start wiping his hard drives and all the information they had. She looks at the window to see Calder arriving. Augie tells her that he thinks Ellen was wrong and the they made the wrong choice. She kisses him before she leaves. He opens the door for Calder as he walks in saying that he is taking everything  and searching the apartment in relation to the murder of Eduardo. Augie’s feigns ignorance as Calder accuses him of shady involvement and that they know of the intimate involvement between him and Annie. They start to break a whole in the wall looking for his safe. They find his safe and requests that he open it before they have to blast it open. They begin to search through it and Calder pulls out a small manilla envelope with a flash drive inside. Calder recognizes it as the one involved in Seth Newman’s death. Calder takes him into custody as the scene cuts away.