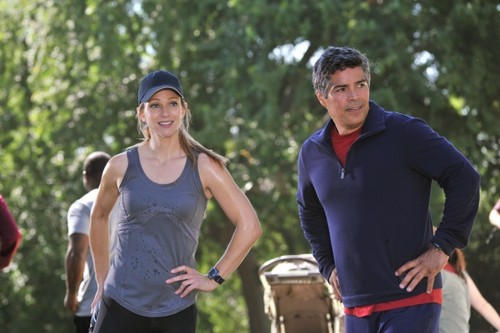 Tonight on CBS CRIMINAL MINDS continues with another new episode called, “To Bear Witness.” On tonight’s season 9 episode 4 Cruz joins the team as they comb the streets of Baltimore for an UnSub who leaves victims unable to communicate. Did you watch last week’s episode? If you want to catch up before tonight’s new episode, we have a full and detailed recap, right here.

On last week’s show when a sniper struck Dallas, the BAU investigated whether the upcoming anniversary of the Kennedy assassination was a motivating factor or if something else was driving the UnSub. Eva LaRue guest starred as FBI Agent Tanya Mays, who assisted the BAU with the investigation.

On tonight’s show the BAU meets their new section chief, Mateo Cruz, who, unbeknownst to them, shares a long work history with JJ. Cruz joins the team as they comb the streets of Baltimore for an UnSub who leaves victims unable to communicate.  Esai Morales joins in a recurring role as Mateo Cruz, the BAU’s new section chief. David Anders guest stars as Anton Harris.

A man was found wondering the streets but the most interesting part about him is not restraints marks he has. He has obvious wounds from a lobotomy and surprisingly he’s alive. The case is so interesting that even the new head of the BAU wants to tag along. Which only makes it awkward for JJ.

Earlier she had enjoyed some light flirtation with him. They used to work together. So to find out he’s her new boss kind of ruined her day. The new chief is Cruz. According to Rossi he thinks this job is only is stepping stone for Cruz. Morgan doesn’t like that. He feels if you want a desk job then stick to a desk job.

Later the victim, still unknown, was awake enough for questioning. Unfortunately, he can’t speak or write properly due to his injuries but he has a clear understanding of everything going on. His torturer took him but it seems he then let him go. He even helped the man escape outside.

Morgan questions the victim over all of the events that occurred. He has his communicating through blinking. Morgan finds out that another victim was taken by his kidnapper. This second victim may have a connection to the man. It seems there’s been one similar case to the current victim’s situation. Garcia found it with help from Interpol. The incident killed a person that time in Germany. The female still missing used to live in Germany.

Morgan is trying to get more information out of the guy but he’s tired. The doctor came to check out his patient when he finds something interesting in the victim’s eye. It’s a camera. One that lets his kidnapper see everything that’s happening.

Their killer is highly intelligent. He likes to watch his victims in pain. He takes pleasure from it. He may be targeting students which could mean he is or was one. He takes his victims in order to express his own pain. He felt lobotomized and now he makes others feel his pain. Still he finds the whole thing amusing. When the team tried to use the little camera in Sam’s eye, finally figured out his name, the killer called their bluff. He sent footage from the camera viral all over the internet.

To stop him they told Sam to keep his eyes close. Well, the killer didn’t like that. He installed camera in Dana’s eye right afterwards. Then he sent that footage viral. He’s taunting them. He shows his face and area where Dana is held. It’s his way of pushing them.

The team doesn’t know the girl’s name is Dana until it’s too late. Sam had wrongly suggested Dani out of tiredness. Yet her name was important. Once they found out about it they realized she had a brother. Troublesome and always second place to his sister, the star. It was her brother that took her and her friend. He did all of this to finally get attention from his parents.

They arrive on the scene to get Dana but all that’s left is collecting her brother. His end game appeared to want to get caught. Yet he didn’t want to stop there. He sent a live feed out of his capture. Hotch lies and says the feed got shut down thereby making brother dearest give up without a fight.

Sam is getting better. He managed to call out Dana’s name and hopefully he and Dana can put all of this behind them. Her brother is hoping they won’t.

He saw their father as he was getting taken in but the older man continue to ignore him. The killer was wrong, his father did love him. Even after everything his son did; he tried to get him extradited back to Berlin where he knew he could get better treatment. Cruz blocked the transfer.

Cruz and JJ plan on lying about their relationship. He claims he didn’t take the job just for her. He wants to meet up later though. She says no…for now.