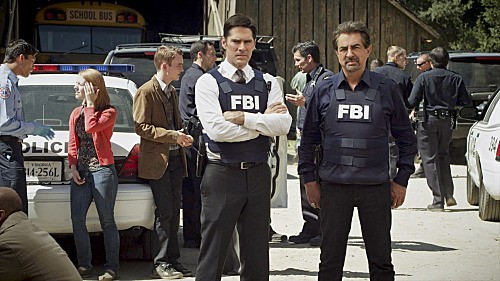 Tonight on CBS CRIMINAL MINDS continues with another new episode called, “The Return” On tonight’s season 9 episode 8 Morgan has conflicting feelings when his girlfriend takes her job at a hospital as seriously as he takes his.  Did you watch last week’s episode? If you want to catch up before tonight’s new episode, we have a full and detailed recap, right here.

On last week’s show after a series of strangulations in Boston, the BAU looked for an UnSub who liked to keep mementos of the victims, and the team wondered if a common link to the casualties could lead them to the culprit. Meanwhile, the BAU rallied around Rossi when his favorite bar is on the verge of closing.  Series star Matthew Gray Gubler directed the episode.

On tonight’s show when teenagers who were reported missing are suspected of a series of mass murders in Chicago, the BAU investigates their whereabouts to find a motive for the crimes. Also, Morgan has conflicting feelings when his girlfriend takes her job at a hospital as seriously as he takes his.

There was an apparent random shooting at a diner. At first glance this wouldn’t normally be a case for BAU yet the perpetrator that was killed is who interests them. He’s a teenager now but 4 years ago he was reported missing. His mother thought it was kidnapping but as he had a history of running away, the cops took as such. Plus it didn’t help the mother had a history of instability. She was constantly in and out of rehab. She eventually died last year so unfortunately she won’t be able to identify the second kid with her son.

Wherever this kid went, he eventually ran into a partner that also served as his driver right for the shooting. used to live in the hotbed of gang territory. The BAU suspect this shooting might have been a gang initiation. However at the scene Rossi and Blake notice how inconvenient the diner would have served as a location. It is located within blocks from a precinct. Also they aren’t any gang stamps in any place at the bar. Maybe they were too quick to label the scene as gang related.

Gavin’s autopsy shows he was recently tortured. Someone literally twisted his arms until they broke. Another red flag is that Gavin’s driver quickly left the scene right after Gavin went inside. That coupled with the cop that took him down makes it seem like it was never a plan for Gavin to escape alive.

The driver reappears. He causes a scene in the intersect. He barricaded himself in the car and refuses to be moved. The driver’s name is Trevor and he went missing within a day of Gavin. Hotch immediately suspected something was off and ordered for the area around Trevor to be evacuated. Luckily people were far enough not to be seriously injured all except one, the officer, when Trevor detonated the bomb.

Someone took these boys and tortured them to the point they were willing to do suicide missions. Once they succumbed to Stockholm syndrome he begins to reaffirm them with love and affection. Making it seem like he’s the only that cares about them. That is how he’s able to win the boys over.

They were four other boys taken around the same time as Trevor and Gavin. Three of them are dead. They most likely refused the conditioning and thus were terminated. Still there is one boy unaccounted for. A kid named Daniel. In order to reach him they use his mother. She makes a public plea hoping Daniel could hear wherever he is. He does.

He wasn’t on the hotline for long but they were able to track his location. Thanks to that call they caught him before he could enter a playground armed to the hilt.

Daniel is programmed that he refuses to say anything more than his name and rank. BAU can’t break him and neither can his mother. But the team at least recognized Daniel’s mission. The man controlling him is targeting cops. The rank number Daniel kept repeating was a badge number. A former police officer was turned in for being a dirty cop. He was turned in by another cop and that’s when his love for the force became hate.

The man that told him out is now the lead detective working with the BAU. Detective Reyes was called in by them moment before a suicide bomber showed up at his precinct. The bomber wasn’t a boy though. It was an adult woman.

She caught sight of Reyes and went on scripted tirade. The former cop believes he’s the last American hero. The squad tries to talk her out of it but are left with no choice but to shoot her. It was the only way to stop her from detonating.

It looks like the woman was the longest kidnapped victim. She probably served as her maternal figure towards the boys he took. Without any more soldiers the team knew their suspect would go looking for another boy to steal. That’s how they brought him. He was in the middle of kidnapping a little boy named Cameron.

Morgan is able to return home to Savannah. He was a little bit put out with her earlier when she surprised him by putting work before him. When he returned from the latest horrifying ordeal though he finds she had set up a romantic dinner. Garcia helped her plan and she was able to show how much she truly does appreciate him.