D.L. Hughley Voted Off Dancing With The Stars 2013 Season 16 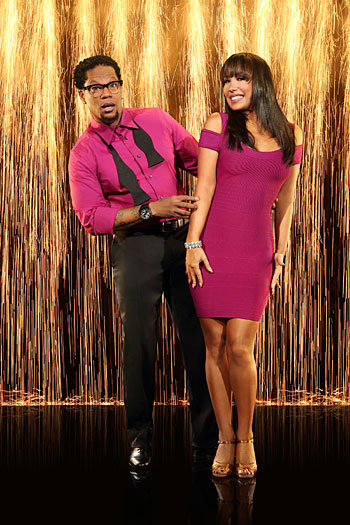 Tonight on DANCING WITH THE STARS Standup Comedian D.L Hughley and his professional partner Cheryl Burke were the couple who landed in the bottom spot.  Sadly, D.L has to hang up his dancing shoes and will dance no more.  Did you watch tonight’s episode?  We did and we recapped it here for you!

On the premiere episode D.L. struggled with his Cha Cha Cha and the judges gave him less than favorable comments.  Bruno said about his dance, “OMG!  He has terminated the Cha Cha Cha. It’s under-rehearsed.”  Carrie Ann said, “Yikes!. You got to go back to work for next week. It was disjointed.”  Len said, ” This was rough. He has to work his butt off.  This was no good.”  The judges scored D.H. a measly 12/30.

D.L. made it very clear on the second  show that he was not pleased with the judges comments and did not like the fact that he felt America was laughing at him.  On last week’s show D.L. danced the Quickstep and his quickstep was not that quick.  Bruno said he did the runs very well and although he was no Fred Astaire, it was okay. “This show is so hard,” Carrie Ann said. “You came back and put the work in.” Len said that D.L.’s dancing was improving.  He scored higher than last week with a 18/30.

On last night’s show D. L danced a Samba and it received a lukewarm response from the judges and landed him tied for last place.  The judges had this to say about his performance.  Len said, “Well it was like a decaf coffee, it looked alright, but it lacked snap.  A couple of plunders lacked attack.”  Bruno said,  “I think you went for aggression.  But instead of a panther you were a stomper.  It was a brave attempt.”  Carrie Ann said, “I loved your focus and loved your intensity.  It was very evident your lack of technique.  But I love how you commit.”

Sound off your comments below and tells us what you think about D.L.’s DWTS experience.  Do you think you D.L. should have been sent home?  Check out the video of his performance last night below!