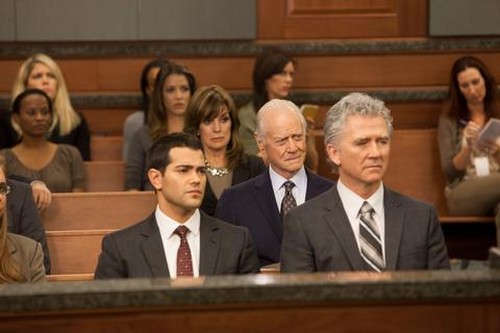 My favorite television show DALLAS returns tonight to TNT with a new episode called, “Trial and Error.” On tonight’s show John Ross’ plot to take over Ewing Energies solidifies. Did you watch last week’s episode?  We did and we recapped it here for you!

On last week’s show with the future of Ewing Energies in jeopardy, Christopher does everything possible to keep a key deal alive. J.R. works to undermine Pamela, forcing John Ross to choose between a Ewing and a Barnes. Cliff Barnes (guest star Ken Kercheval) returns to meet with an unlikely visitor.

On tonight’s show Ryland continues his onslaught of Ann, exposing secrets from her past that threaten to destroy her. Meanwhile, John Ross’ plot to take over Ewing Energies solidifies; Christopher changes tactics with Pamela Barnes; and an enemy from the Ewings’ past resurfaces.

Tonight’s DALLAS season 2 episode 5 is going to be exciting, and you won’t want to miss. So be sure to tune in for our live coverage of Dallas — tonight at 9PM EST! While you wait for our recap, hit the comments and let us know how excited you are about the new season?  Check out the sneak peek of tonight’s episode below!

Anne is raging at Harris for lying about who shot him. He tells her that’s her price for thinking she could live without him. Security throws her out.

Anne spots blood on her boots and decides that might clear Bobby. She goes to the police station and confesses.

Harris daughter wants to know why he lied about Bobby and he says he was confused after surgery. Judith tells her not to question her father.

Cliff chews out Pamela over losing Frank. He tells her she doesn’t need John Ross and she promises her dad no more emotions getting in the way.

Lou tells Bobby he’s cleared and Anne will be indicted. They plan to plea sudden passion due to duress over her daughters kidnapping.

JR gets a call from Cliff. He tells him John Ross sold him and Frank out. JR tells him to go to hell.

One month later and Anne is on trial. JR and Sue Ellen are there and John Ross and Christopher with his lover Elena.

Harris will be allowed to testify. The hearing starts. Attempted murder is the charge. They call Judith first. She calls her a gold digger, a cheater and trash. She says she wanted an abortion. Lou calls for objections and says her testimony is biased. Judith goes nuts and she’s forced off the stand and her testimony stricken.

Clyde is still watching Drew up to no good. There’s a morals clause on Elena’s loan that he’s violating.

Pamela is testifying for Anne and Christopher sees her there and gets ugly. She gets ugly back. She tells him if he keeps it up she’ ll move to Bermuda and he’ll never see the babies.

One month later and Anne is on trial. JR and Sue Ellen are there and John Ross and Christopher with his lover Elena.

Pamela thanks John Ross for going to Cliff about Frank. He asks her for a date but she says they need to keep it to business.

Drew gets out of a semi and heads into a BBQ place. Clyde doesn’t have time to sneak a look.

Sue Ellen tells JR to get over John Ross going to Cliff and orders him to forgive.

They wait for the verdict and see the guy who killed Marta getting sent back to Venezuela.

The evidence confirms Anne was there and shot Harris. The cop says the shooting seems premeditated. The surgeon testifies how the gunshot wound almost killed him. The doctor says passion killings involve multiple gunshots and this was more like an execution.

Drew gets pulled over. His tail light is out compliments of Clyde. He doesn’t have the right paperwork and the cops open up the trailer. Supposed to be car parts but its counterfeit purses and shoes.

Sue Ellen and Pamela testify on Anne’s behalf. Elema gets a call about Drew and heads out. He pleads ignorance and she lets him have it. She tells him she’ ll
bail him out and get a lawyer.

JR corners John Ross and offers him a half assed olive branch. John Ross gets a text with the good news of Drews arrest.

Harris is called to testify and makes a big show of looking pitiful. He says she asked about Emma and then shot him. He says he gave Anne everything but she was a bad mom and abandoned her to go party. He said he found her in dirty diapers and hungry. He said she came home late and drunk.

He said the day he took Emma he had a bad feeling and followed her. He says she left her in the strolled and walked away. He said he took Emma to protect her.

Bobby asks Anne if any of Harris’ story was the truth. She takes the stand. She talks about how gangly she was and how he was the first boy who liked her.

She said he was oppressed by his mother who was cruel to her and lied to Harris about her. She said that started the abuse that ruined their marriage. She said she had post partum depression. She said she left Emma with her grandma to go see a divorce lawyer and Judith left her there. The day of the state fair she was upset about Harris and took an extra anxiety pill. She said she was hot and thirsty and left her to get a soda. She said it was just a couple of minutes but she was gone. She said God punished her by taking her baby.

Christopher finds Emma outside the courthouse. He tells her she’s the same age Anne was when it all happened. He says she may get 20 years and she should tell the court the truth. She asks him to leave.

Emma takes the stand. She says she didn’t see Anne at the hospital. She says her Dad has a big heart who’s always been good to her and protected her. She says she’s glad every day he rescued her from her mother.

Christopher stares at Pamela rubbing her tummy. He agrees to mediation and then she groans because they kick. She let’s him feel the babies kick and he’s overjoyed, near tears. Cliff is pleased that she got Christopher to cave on the divorce.

The Ewings sit at a restaurant waiting on the verdict. They get the call that the jury is back. The verdict is… guilty!!!! Anne is taken away to jail until sentencing.